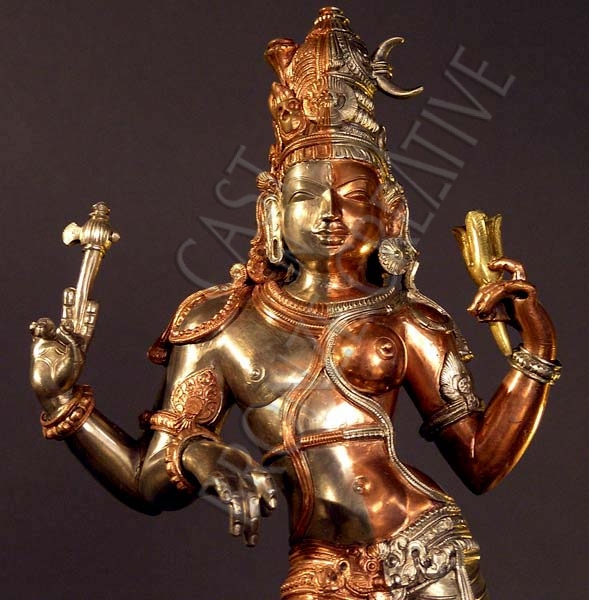 Named as Arthanareeswara, Lord Shiva reflects His left part of the body as His consort Parvathi - a symbol for the deity's deep love for His wife and vice versa. As learned from the devotional pieces of literature like Thevaram and Thiruchengottu Puranam, Goddess Parvathi had performed penance in popular holy places like Kedarnath, Kasi, Kanchi and Thiruvannamalai to obtain a boon to become permanently a part of Her husband. And the people of the Kongu region can take pride that the 'holiest' place, where Parvathi could, at last, obtain the boon was Thiruchengode in the Namakkal district.
Mentioned as ' Thirukodimaada Chengundrur' in various pieces of ancient Tamil literature, the town is popular for its Arthanareeswarar Temple, a hill shrine, which inspired many devotional poets to sing paeans on it. Observing an incident from the great Tamil epic Silapathikaram, Arumpatha Urayasiriar, a well-known commentator on the epic, pointed out that its heroine Kannagi came to the hill Neduvel Kundram, which is none other than Thiruchengode, after setting Madurai on fire.
Linking the Lord's relationship with Kongunadu, Arthanareeswarar Kuravanji, another literary work penned by the 17th century Kongu woman poet Poongothai, mentions Shiva and Parvathi of Thiruchengode as 'Kongar Desar' and 'Mohanangi' respectively.
Thiruchengode, which means 'a holy, red, mountain peak' looks like a snake when viewed from the plains. Therefore, it got its other names as 'Nagasalam', 'Nagagiri' and 'Uragagiri'. Celebrated Tamil Bhakthi poet Arunagirinathar, known for his devotional poem Thirupugazh, calls Thiruchengode as 'Nagasalam' in his literary works Kanthar Anuboothi and Kandhar Alangaram.
However, archeologists and historians opine that Thiruchengode was a tribal hill shrine once, since the Naga Vazhipadu or worshipping snakes had been a culture with ancient tribes. They contend that even the carving of the 60 feet 'Aadhisedan' ( chief of the serpents) on the hill shrine is nothing but the remnant of the tribal culture.
The temple at Thiruchengode, besides its popularity in such pieces of literature, recently became a spot of cultural politics after noted Tamil writer Perumal Murugan was hounded by Hindutva and caste outfits, as he had said in his novel Madhorubhagan that childless women of Thiruchengode once indulged in consensual sex at the Arthanareeswarar Temple in order to get conceived.


And for the second time, the shrine's name has hit the headlines of newspapers, after Gokulraj, a Dalit engineering graduate, was abducted when he was with a caste Hindu girl Swathi at Sri Arthanareeswarar temple and later allegedly murdered by a nine-member gang.


It is said that popular Shaivite Tamil poet Thirugnana Sambanthar, while staying in Thiruchengode during a winter season, witnessed all his apostles fell ill and sang a hymn in praise of Lord Arthanareeshwara that made the malady disappear from the entire town.

Nonetheless, the prayer today to the Lord is “ Arthanareeswara, End this Epidemic Called 'Caste'

Link to my article in The New Indian Express : http://epaper.newindianexpress.com/535696/The-New-Indian-Express-Coimbatore/05072015#page/2/1
Posted by B.Meenakshi Sundaram at 05:50 No comments:

Waking up the Village Dawn by her Auspicious Music 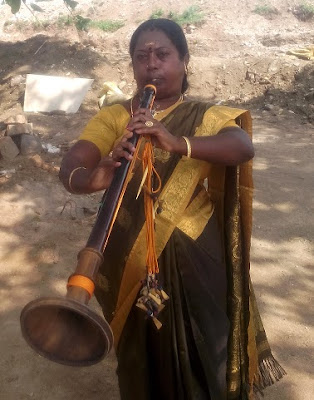 In Tamil Nadu, there are hardly any festivals that begin without the auspicious notes played in the traditional musical instruments Thavil and Nadaswaram. And, blessed is a hamlet near Pollachi, as it wakes up everyday to the auspicious crescendo of Nadaswaram when a woman musician regularly practises playing it in her home early in the morning.
“ Though it is rare for people to come across women playing the Nadaswaram, I don't think gender has anything to do with music” says M.N. Kaleeswari, the 41 year old Nadaswaram artiste.
Clad in her dark green silk saree, she presented her performance in the consecration of her village's Amaneeswarar Temple, which is one of the ancient shrines of Coimbatore.
“ Playing Nadasawaram gives me pleasure and tranquility. And the joy, which I cannot express in words, is something felt only by playing the instrument” avers Kaleeswari.
Hailing from a traditional music family in Pollachi, Kaleeswari studied only up to class VIII. Nevertheless, her father Murugesan, who was a Thavil vidhwan, encouraged her to learn Nadaswaram.
“ My flair for music is something innate, as I was a passionate listener to songs on the radio even while I was a girl. And wherever there was a Cutchery in the agricultural town, my father used to take me with him. Sitting in the front row, I would keenly observe the intricacies in the Nadaswaram music. When I was 10 years old, my father enrolled me as a student under Nanjappa Gopalswamy, a popular Nadaswaram vidwan in Zamin Uthukuli ” she recalls.

Kaleeswari points out that a thorough vocal practice in Sarali Varisai, the fundamentals of Carnatic music, is mandatory for learning Nadaswaram. Reminding the lines of the lyric Eazhu Swarangalukkul Eththanai Paadal..., she notes that all ragas are nowhere but within these seven swaras.


“ I did my first performance with my teacher at Pollachi, when I was 20 years old. The audience were at a surprise on watching, for the first time, a girl perform the Nadaswaram. However, with my love for the instrumental music, I had little hesitation to present my maiden performance” she reminisces.


Her father Murugesan's passion for the traditional music, can be felt in his making Kaleeswari a Nadaswaram vidwan. He had not worried that he had no sons to continue his line.


“ What's more, my father also gave me in marriage to Nataraj, a Thavil Vidhwan in Devanampalayam, so that we both could continue our family's music tradition ” she informs.


Sharing her favourite old film songs that she plays in Nadasawaram, Kaleeswari notes:


“ We play the Mangala Isai ( Auspicious music) in weddings, temple consecrations, ear boring and puberty ceremonies. In a number of weddings, I have enthralled the audience by playing the lyrics that match situations like 'Poomudipal Intha Poonguzhali' during 'Manapen Azhaippu' and 'Olimayamana Ethirkalam En Ullathil Therikirathu' soon after the 'Muhurtham'”


Like her father, Kaleeswari and Nataraj also want their family's music tradition to continue. And they teach it for their nephew, since the couple has no children.

Link to my article in The New Indian Express: http://epaper.newindianexpress.com/534988/The-New-Indian-Express-Coimbatore/04072015#page/17/1

Posted by B.Meenakshi Sundaram at 00:04 No comments: