Sadagopachari, a son of an orthodox Jeeyar ( A preacher of Vaishnavism) of Tirunelveli, one day, became Arthur Paul!. Had the man, who pursued education in the famed St. Joseph's College, Trichy in the 19th century, not embraced Christianity, Coimbatore could not have seen its first woman doctor Mercy Paul, who was none other than his daughter.

“ Because, in the orthodox Hindu society, girls had little opportunity to pursue even formal school education. My grandfather Sadagopachari was even driven out of home after he embraced Christianity ” recalls 70 year old Primela Mary, a retired physics teacher from G.R.G.Matriculation Hr.Sec.School and the daughter of Coimbatore's first woman doctor. Primela Mary was also a recipient of Dr. Radhakrishnan state award for the best teacher.

Mercy Paul, who was born in 1905, came to Coimbatore around 1929 as an L.M.P ( Licentiate Medical Practitioner, since there was no M.B.B.S then).

Fondly called as 'Paul Doctoramma' by the then Coimbatoreans, Mercy Paul pursued her education in the Christian Medical College and Hospital, Vellore, under its founder Dr. Ida.S. Scudder, an American medical missionary-turned physician, who championed the cause of women by founding the exclusive medical school for girls.

Reminding Portia's quote The quality of mercy is not strained ... from William Shakespeare's play The Merchant of Venice, Mercy's love for mankind made her serve and save the people from plague when the city witnessed the outbreak of the deadly disease.

Nonetheless, the physician, who saved hundreds of human lives from the jaws of death, could not get a chance even to pay the last rites to her father Arthur Paul when he passed away in Guntur, Andhra Pradesh, as there was little transport facility in the past.

An inconsolable woman, when she later decided to leave Coimbatore, it was Diwan Bahadur C.S. Rathina Sabhapathy Mudaliar, the municipal chairman of Coimbatore, advised her to continue her service here” recalls Primela.

In contrast to the modern age, where most corporate hospitals cheat and fleece patients, Paul doctoramma was devoted to serve people and demanded no fees from them.

“I remember an occasion when some parents rushed their child to our home, saying that it had swallowed a coin. However, within a few minutes I could see them shed tears of joy and look up to my mother after she removed the foreign object from the little one's stomach. Though my mother served in the municipal hospitals of Coimbatore, which were called Solakada Mukku Aaspathiri and Devangapettai Aaspathiri, she never loved a luxurious life. She felt no dissimilarities, when the rich, seeking her medical service, took her to their posh bungalows in cars and the poor to their huts on bullock carts “ Primela reminisces.

Source: Ida Scudder, the Angel of Mercy – By Primela Mary

Link to my article in The New Indian Express http://epaper.newindianexpress.com/c/6675223

Posted by B.Meenakshi Sundaram at 23:39 No comments:

A Trip into the Ancient South under the Cholas 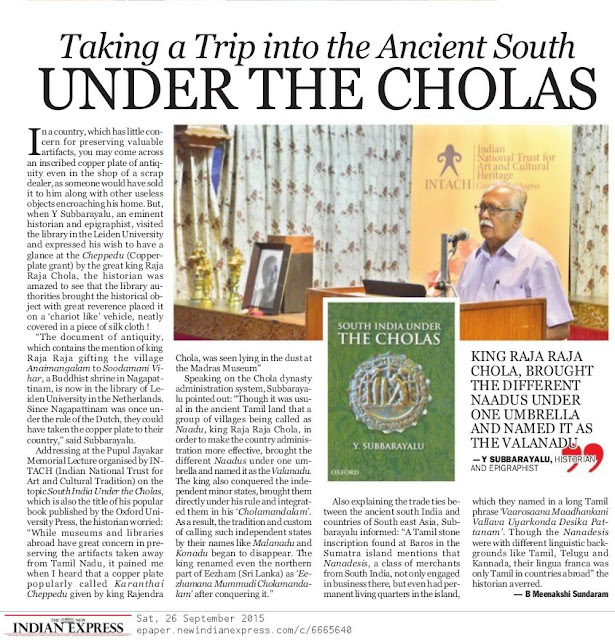 Posted by B.Meenakshi Sundaram at 01:33 No comments: 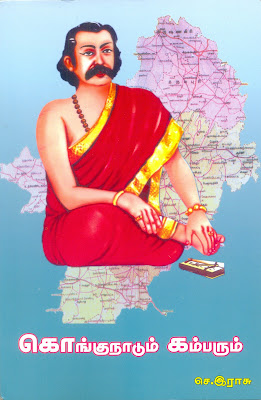 Thanipadal Thiratttu, an old collection of classical Tamil poetry, contains a verse on Kongunadu, which is attributed to the great Tamil poet Kambar. However, if the people of the Kongu region read it, they will certainly condemn the famed bard, as the poem portrays their land in poor light.

The verse points out that all streams and rivers in the Kongu region being dirty, emanated the odor of mud. The uneven lands, full of stones and thorns. Crudely named villages suffixed in 'Patti' and 'Thotti'. Kambanchoru ( A meal in bulrush millet), the regular food of the people and the men bearing 'unfashionable' names like 'Bomman' and 'Thimman'. Worse still, the poem describes the Kongu girls as 'dogs' and 'devils' and tells a reader never to imagine leading a life in such a dark region called Kongunadu.

Nevertheless, eminent historian and epigraphist Pulavar Se. Rasu, in his new book Kongunadum Kambaraum, disagrees with the opinion and asserts that Kambar could not have written such a song, but any 'Vambar' ( A person who intentionally provokes others) must have done it !

Citing references from various pieces of classical Tamil literature, Rasu says that the water of river Bhavani had the fragrance of sandal and river Noyyal has been described as 'Manakkum Kanchi Maanadhi' ( The fragrant Noyyal). As the water in these two rivers was once as clear as crystal, even the ornaments, which the girls lost while swimming, were visible in the depth of the rivers, when viewed even from the surface!

Kambar, who penned the work Mangala Vazhthu, an auspicious, long lyric, which is recited in the wedding ceremonies of the Kongu Vellalar community, Eaer Ezhupathu, a collection of 70 songs admiring the occupation of agriculture and so on, had high regards for the people of Kongunadu.

Moreover, with its popularity, the poet's masterpiece Kambaramayana, had two different impacts on the literary world of Kongunadu.

Emperuman Kavirayar, a 17th century Tamil poet, rewrote the Kambaramayana in a simple language, setting to the music played on 'Thakkai' a traditional percussion instrument of Kongunadu and appropriately titled his work as 'Thakkai Ramayanam'. On the other hand, while Ramayana portrayed the Lankan king Ravana as the villain in the epic, Pulavar Kuzhandhai, an eminent Tamil scholar and a rationalist thinker of the Kongu region, made Ravana as the hero of his literary work Eravana Kaviyam, which was banned in 1948. However, after over a period of over two decades, the ban was lifted in 1971.

Admiring the value of the work, T.A.Muthusamy Konar, the first historian of Kongunadu, once expressed his wish to publish the literature and advertised in his monthly journal Viveka Diwakaran that whoever brought him the palm leaf manuscript of Thakkai Ramayanam, he would reward him with Rs 10 !

Link to my article in The New Indian Express : http://epaper.newindianexpress.com/c/6596964
Posted by B.Meenakshi Sundaram at 20:01 No comments:

The Purana of Kongunadu's Conventional Agriculture 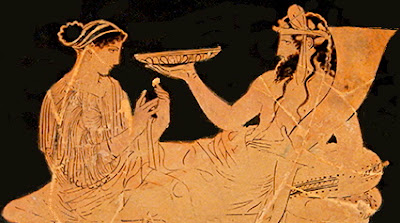 It is doubtless that no other literary work in the world has glorified agriculture as much as Thirukural. And the people of the ancient Tamil land had high regards for the farmers' service to mankind , as read from a couplet in the great work, which points out that even ascetics would long for their wants, if farmers failed to till their lands. Though the Tamil classic dedicates an exclusive chapter on farming and its key role in shaping mankind, the credit of authoring a comprehensive work on agriculture goes to a 19th century Tamil poet from the Kongu region.

According to a tale in Greek mythology, Hades, the king of the underworld, fell in love with Persephone, the beautiful daughter of Demeter, and abducted her to his dark land. Though it was a common belief that one who ate anything in the underworld could not reach the earth again, Persephone, unable to bear the pangs of hunger, tasted and swallowed six seeds of pomegranate in the land of Hades. As she did so, the logic behind the tale informs that Persephone must live the first six months in the underworld and the following six months on earth.

When Persephone appeared on earth, the planet witnessed blooming of flowers and growing of crops, as the joy of her mother Demeter, the Goddess of vegetation, knew no bounds. However, when the time came for Persephone to bid adieu to earth, Demeter worried a lot and the earth turned unproductive. Legend has it that this was the reason behind seasonal changes.

But, the Vellala Puranam, a literary work on agriculture by Mahavidwan Kandasamy Kavirayar, links the origin of agriculture with Hindu mythology.

Kandasamy Kavirayar, who was born at Veerachi Mangalam near Dharapuram in the Kongu region, penned the work in the 19th century. The book was first published in 1907 at Nithya Kalyanasundaram Printing Press in Erode by Naa. Muthusami Pulavar, who was also a traditional medical practitioner and astrologer in Kongarpalayam.

Though Vellala Puranam narrates the legend of Marabalan or Vellalan, the first agriculturist said to be born from river Ganga, flowing from the matted hair of Lord Shiva, the work admires the virtues of farming and provides information on everything related to agriculture like suitable seasons for cultivating crops, methods of irrigation and so on. Being a handbook even for today's organic farming, Vellala Puranam provides valuable information on a variety of traditional agricultural equipment and the use of manure to improve the soil's fertility.

The book, which consists of 1373 songs under 29 chapters, says that Marabalan was married to Aintree the daughter of Indira and Tharaniyavathi, the daughter of Kubera in heaven.

Vellala Puranam notes that the four-faced God Brahma created Marabalan to save human beings from hunger and his descendants spread across the world as agriculturists.

“ With the portrayal of people ploughing lands in the lyrics of Pathitrupaththu, a Sangam period work and the excavation of rain-fed grains in places like Kodumanal and Porunthal, the history of agriculture in the Kongu region dates back to the later years of the Neolithic period, when people experienced the transition from nomadic life to settled community life”

Link to my article in The New Indian Express : http://epaper.newindianexpress.com/c/6527533