Rediscovering the Stone Inscription inside a Jungle 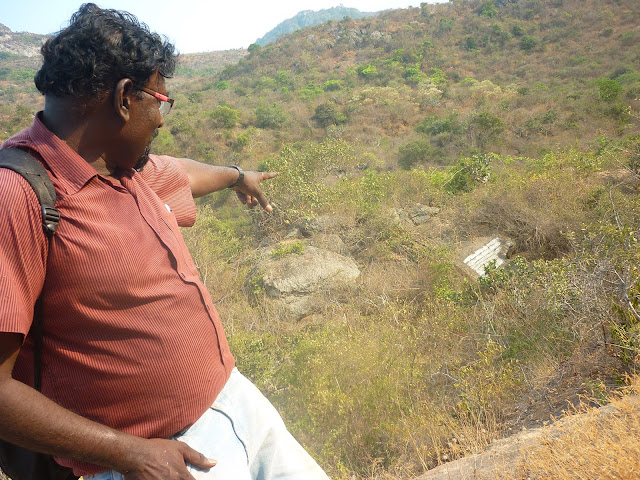 A private deemed university, which is functioning close to the Ettimadai forest, in case, extends its campus further, Tamils are sure to lose a historical treasure - a 1100 year old inscription on a rock inside the deep forest. A venba ( A four-lined traditional verse) inscribed on the rectangular slab of rock, is in praise of the king Aditya Chola I, who relaid an ancient highway that ran through Coimbatore for several centuries even before the Christian era. Interestingly, the inscription, which is alongside the disused ancient highway, mentions the road's name as 'Rajakesari Peruvazhi', carrying the monarch's title ' Rajakesari' (Lion of kings).

Though the inscription has withstood the test of time, braving heat and rain for these many centuries, protecting the monument is the need of the hour, for it is already in peril.

This correspondent, who failed for two times earlier in tracing the inscription due to the dangers of wild animals, was successful exactly at 4.25 PM on April 1 - ironically on the day of fools !

“ We could never have imagined to catch a glimpse of the inscription, had Anbarasu, Ramasamy and Guruvayurappan, the natives of Ettimadai, not taken us into the woods “ averred D.Sundaram, an epigraphist.

As the mountain path is blocked by numerous thorny bushes, Ramasamy, who leads the team, cuts through the undergrowth with his sickle. And one could be amazed at the rural man's knowledge of native geography, as he rediscovers the inscription after an interval of 25 years.

“ I last saw the inscription in 1991. However, as boys, my friend Anbarasu and I used to graze goats near it. At that time, we had little chance to realise its historical value“ says Ramasamy,

Pointing at a herd of Sambar deer walking on an adjacent hill, Anbarasu informs:

“ A day in summer is the suitable time to trace the inscription inside this forest, since animals are easily visible in the absence of green “

Anbarasu now stumbles upon a fallen antler near a sandalwood tree:

“ You know the antlers of the Sambar deer falls off once they have ossified ” he informs.

Pointing at a tree, whose bark is peeled off, Anbarasu explains it in his typical Kongu Tamil dialect:

“ Maanu, Kombu Theeteerukkuthu Paarunga ( Just look at the tree, against which a deer has rubbed its antler) ”

Anbarasu used to read books while grazing goats near the disused highway. But, it was a coincidence that he discovered the highway’s name as ‘Rajakesari Peruvazhi’ while reading an article in a magazine at the same Rajakesari Peruvazhi!

The Venba in the inscription is in praise of the Chola king Aditya I, which reads thus:

Link to my article in The New Indian Express: http://epaper.newindianexpress.com/c/9576104

Posted by B.Meenakshi Sundaram at 21:49 No comments: