The former headmaster of a city-based school, which had once been singing' Jana Gana Mana' as its school song even before it was made the national anthem, is a Tamil scholar of exceptional talents. The octogenarian 'Adukkumozhi ' Ramasamy is known for his amazing skill of delivering speeches extempore in a rhythmic Tamil language. What's more, his passion for the cadence made him even to name his home as Thamizh Chimizh ! ( Casket of Tamil )

“ I was told that on a day in the pre-independence era, great poet Rabindranath Tagore had visited our school and sang his poem 'Jana Gana Mana' for the students. From then on, the institution began to sing it everyday as its school song, until, at a later time, it was declared as the National anthem” says Ramasamy, former headmaster of the heritage institution - PSG Sarvajana Higher Secondary School.

Known for his extempore Tamil speech in a language, which is full of alliteration, consonance and rhyme, he is appropriately called ' Adukkumozhi ' Ramasamy. Go to his home at Peelamedu Pudur, the 84 year old is sure to hold you spellbound by his sweet rhythmic language, even as he welcomes you at the entrance.

“ I do not know how I mastered the skills in word play. However, I had the opportunity of studying under legendary Tamil professors Ma. Ra.Po. Gurusamy, Tha.Ea. Gnanamurthy, A. Ki. Paranthamanar, Rasamanickanar, Avvai Duraisamy Pillai and Aram, who were my inspirations” he informs.

Ramasamy is also an alumnus of same PSG Sarvajana Higher Secondary School between 1946 and 1949, when Srinivasa Iyengar, father of the famous educationist S.S.Rajagopalan, was its headmaster.

“ Baskar Iyer was my Hindi master at school. A powerful orator in Hindi, English and Tamil, he would come to the institution in his 'Angawastram' draped around his neatly ironed white shirt. It would resemble the dressing style of C. Rajagopalachari, the last governor general of India” recalls Ramasamy.

“ But, the term was first coined by Ramasamy Ayya” chips in Kumarasamy, a present day Tamil teacher at the PSG Sarvajana Higher Secondary School, during Ramasamy's interview for Coimbatore Express.

And Ramasamy recalls the incident:

While Ramasamy was a student at Sri RamakrishnaVidyalaya, its founder and former education minister T.S. Avinashilingam Chettiar lauded him for his oratorical skills in rhythmic Tamil language and told him to accompany Acharya Vinoba Bhave in a padhayatra from Mettupalam to Perur – the leader's campaign for Bhoodhan movement in Coimbatore.

“ In the procession, I even composed a song 'Nilathai Pangi Thaareero Bhave,Vino Bhave..' and sang it throughout the campaign “ reminisces Ramasamy.

The octogenarian, who has addressed in numerous literary meetings, was recently invited to speak in a wedding held at Washington in the US.

“ Interestingly, it was the marriage of a Thanjavur-based Tamil bride with an American bridegroom, whose name is Stuart Francis Murphy. When I solemnized their wedding, I made the American groom recite the couplets from Thirukural and explained the work's glory to the American guests” says Ramasamy.

With his passion for chaste Tamil, Ramasamy christened his son and daughter as 'Porchezhiyan' and 'Poonguzhali' respectively.

“ My grandchildren 'Amutha Yazhini' and 'Nambi', who are pursuing higher education in the US now, speak chaste Tamil better than me” winds up Ramasamy.

Link to my article in The New Indian Express: http://epaper.newindianexpress.com/c/18507372
Posted by B.Meenakshi Sundaram at 08:23 No comments:

Compiling The Rationalist's Ideas on Society 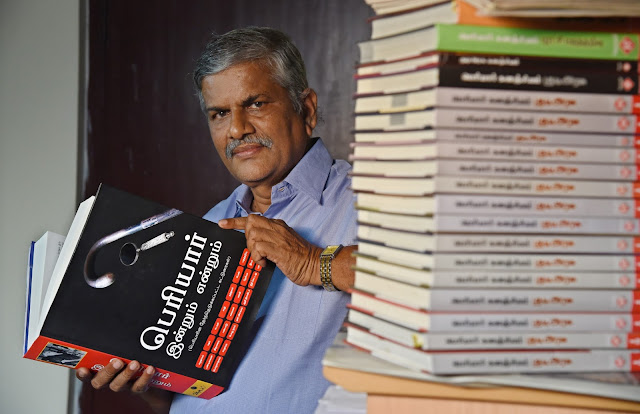 If rationalist leader Periyar E.V. Ramasamy's wife Nagammal and his younger sister Kannammal lived today and picketed the TASMAC outlets, as how they had done at the toddy shops after an order from Mahatma Gandhi, they too might have been slapped by a senior police officer for their 'irreverent' act against the 'divine' drink. 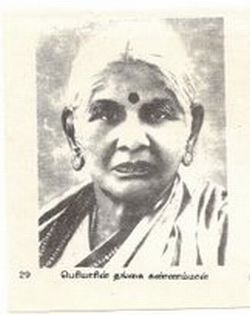 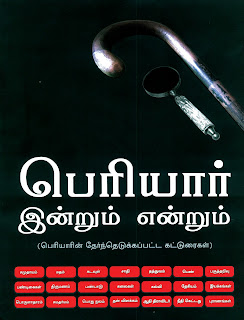 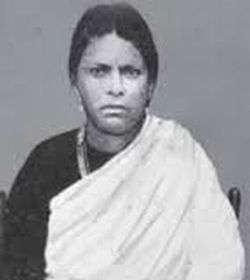 “ Nagammal and Kannammal played a key role in the anti-liquor stir of those days, and there have been no reports of the two women got beaten up by police. What's more, even in the salt satyagraha, the British cops did not exercise violence on women. But a police officer slapped a woman protestor in the recent anti-liquor stir at Samalapuram in Tirupur district. The barbaric act reflects only a society, which is devoid of culture ”

A well-read man in the moral pieces of Tamil literature, Arokiyasamy says:

“ Despite great developments in science and technology, the present day society lacks in moral values. With Tamil being rich in didactic pieces of literature, edifying works like Thirukural and Naladiyar need to be taught to the modern day cops in order to make them understand what humanity is”

A retired post master from the Central Post Office and a staunch follower of Periyar EVR's ideology on feminism, Arokiyasamy tagged his wife's name 'Parimalam' with his, and has been called ' Parimala Manalan Arokiyasamy' ever since the day when he took to writing.

'Parimalam', as he is shortly mentioned by the intellectuals of Coimbatore, points out:

“ Periyar EVR is incorrectly understood as a mere atheist and materialist. And most of us have failed to know him a great humanist, whose atheism is based on humanism.”

As a student in the Government Arts College, Coimbatore in the early 1970s, Parimalam, with his college mates, met Periyar when the leader came to meet his friend and popular scientist G.D.Naidu in the city.

“ As we entered the G.D Naidu Hall, Periyar stood up in respect and welcomed us. In course of his conversation, he advised us to concentrate only on our academic studies and not get deviated from the path of progress ” reminisces Parimalam

However, in the following year, Parimalam experienced a rare coincidence in his life:

“ After my graduation, I felt the compulsion of taking up a job. And I received the appointment order from the Department of Posts on December 24, 1973 - the very day Periyar breathed his last !. And the agony caused by the great man's demise, did not allow me to share my joy of getting the government job with anyone“

The voluminous book has been published by the city-based ' Vidiyal Pathipagam'. The work acknowledges V.Anaimuthu, a veteran researcher on Periyar's literature, Dravidar Kazhagam leader K.Veeramani and Kolathur Mani, founder of Dravidar Viduthali Kazhagam, from whose publications the articles were taken. Pulavar Senthalai. Na. Gowthaman, the first social historian of Coimbatore, and Tholkappiyan, another ardent collector of Periyar's works, provided the source materials to the editor for making this comprehensive book. The work brings out the necessity of Periyar's ideas, from whose perspective one can view the social and political affairs of any time. A convenient material for quick reference,the work has been compiled in the discipline of EVR's articles under respective titles as society, religion, god, caste, philosophy, education, culture, women's emancipation and so on. 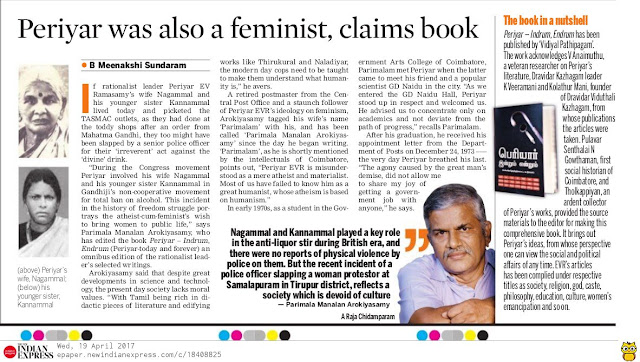 Link to the article in The New Indian Express : http://epaper.newindianexpress.com/c/18408825
Posted by B.Meenakshi Sundaram at 18:18 No comments: