The People Behind the Bricks and Mortar of Coimbatore 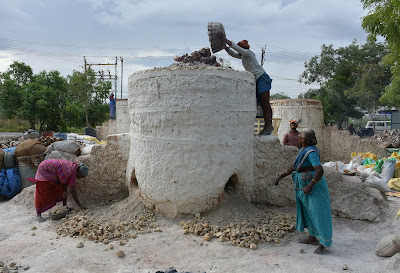 On a sultry afternoon, Lord Siva and his consort Parvathi were walking upon the earth; they got very hot and thirsty. Siva felt the drops of perspiration all over his body and changed them by his divine power into a man carrying a pick-ax and crowbar. Similarly, Parvathi changed her drops of perspiration into a woman carrying a basket. The man and woman quickly sunk a well with their equipment. Now Siva and Parvathi refreshed themselves in the cool waters of the well and, in gratitude, they promised the labourers certain gifts.

With neither of the labourers being satisfied with the gifts, they demanded more with a grumble. Lord Siva, who grew angry at their act, cursed them and vowed that they and their descendants shall live only by the sweat of their brow.

The above story, which is traced by the British ethnographer Edgar Thurston, speaks on the birth of the first members of the Boyar community. Another similar story on the birth of the community says that the same Siva and Parvathi ordered the members of the Boyar community to sink wells to quench the thirst of the Devatas (Celestial people). Having dug the well, they demanded payment. But Siva, instead of money, gave a pinch of sacred ash for each work they did. When the labourers reached home, they found to their surprise, that all the pinches of sacred ash were turned into money. Yet, the Boyars were not satisfied and clamoured for more. Siva grew angry at their act and cursed them thus:

But Parvathi, who took pity on them, asked Siva to give them large sums of money. Then Siva hollowed out a measuring-rod (A staff used by Oddars for making measurements), filled it with varahans (gold coins), and gave it to the maistry or the head mason. The lord also filled a large pumpkin with money and buried it in a field, where the Oddars were working. The maistry, whom Siva presented the gold coin –filled measuring rod, pawned it for buying toddy.
Though the Oddars did not find out what was inside the raised mound caused by the burying of the pumpkin, a buffalo, which was grazing in a field close by, exposed the pumpkin to them. However, without suspecting the contents in the pumpkin, the Oddars sold it to a member of the Komati caste, which is known for its profession of banking, money lending, and other business pursuits.

Edgar Thurston has few answers for the above two tales on their depicting the Oddar community as a dissatisfied and unwise lot.
The Oddars or Boyars are identified with their traditional occupations as sinking wells, constructing tank bunds and buildings, quarrying stones and executing other kinds of earth work. As said above, legend has it that their first ancestors were a couple who sunk a well for the deities Siva and Parvathi. But, in reality, it was a man from the Boyar community, who provided drinking water from his well to his neighbours in Coimbatore decades before the arrival of sweet Siruvani water.
A poem in Nerisayil Oorisai, a book of venbas on Kongu history, speaks on a street that runs north to Nawab Hakkim Road in the heart of the city as ‘Naangenathu Veethi’ which is a corruption of ‘Nagan Kinatru Veethi’

“The street’s name is after Naga Boyan, who owned a well and provided water to his neighbours “informs Kavianban Babu, a historian of Coimbatore, who authored the book Therintha Kovai Theriyatha Kadhai (Known Coimbatore; its unknown tales)

The Oddars, most of whom are construction workers today, had once been makers of brick, for they owned a large number of brick kilns in Coimbatore.
Edgar Thurston, while writing a chapter on the Oddars on the title ‘Odde’ in his comprehensive work Castes and Tribes of Southern India, informs:
“The The caste title of the Oddes is Nayakkan and Boyan. The similarity of the latter word to ‘Boer’ was fatal, for at the time of my visit to the Oddes in Coimbatore, the South African war (Boer war) was just over, and they were afraid that I was going to get them transported to replace the Boers who had been exterminated in the war. Being afraid of my evil eye, they refused to fire a new kiln of bricks for the new club chambers at Coimbatore until I had taken my departure”

However, the history of Coimbatore Medical College and Hospital informs that one by name Nanja Boyan from the Oddar community at Nanjundapuram in the city supplied bricks to the construction of the hospital at a rate of six annas per hundred in the early 20th century!

Documenting the physical appearance of the Oddars , when he visited Coimbatore in the early 20th century, Thurston says:
“Coimbatore – “ Numerous, owing to the hard nature of the subsoil and the immense and increasing number of irrigation wells, which demand the labour of strong men accustomed to the use of the crowbar, pick-axe, and powder. They are black, strong, and of good physique, highly paid, and live on strong meat and drink."

Thurston says that the word ‘Odde’ is said to be the corruption of the Sanskrit ‘Odhra’, the name for the state called Orissa, which is Odisha today. Besides Telugu, the Oddes speak a peculiar dialect among themselves. Thurston says that if that dialect should be turned out to be Oriya, the question might be regarded as settled.

Link to my article in SimpliCity :  https://simplicity.in/articledetail.php?aid=1084&fbclid=IwAR3SbCZ59-hvZ5bpep_mjCZGO50YZQmwIycxdoO2lSVN3pAFbhv4pHsRDpg
Posted by B.Meenakshi Sundaram at 02:31