Discovering Roots of Vaishnavism in the Sangam Age 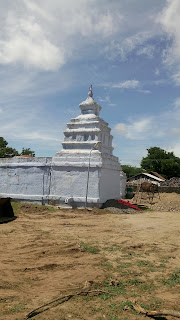 Discovering Roots of Vaishnavism in the Sangam Age


According to the popular story The Tower of Babel in the Old Testament, when human beings wanted to live together and attempted to build a city and a tower reaching up to the heavens, the Lord, by making each of the people speak a different language, prevented them from reaching the heavens. And it is surprising that such a desire of man to link earth with heaven can be seen even at a village Vaishnavite temple in Coimbatore.

“ The tall pole, which is called Garuda Kambam, erected vertically in front of the temple, is a symbol of man's wish to connect earth with the heavens” explained R.Poongundran, eminent archeologist and former Assistant director of Tamil Nadu Archeology Department.

Poongundran and epigraphist D.Sundaram were recently at a Perumal temple in Vadachittoor near Pollachi for deciphering a few stone inscriptions on the shrine's wall. As the temple is gearing up for the consecration shortly, the villagers invited the duo to decrypt the stone inscriptions and trace the history of the shrine.

As the inscriptions were covered in thick lime-mortar paste for ages, the epigraphists cleaned and deciphered them.

Describing the entry of Vishnu cult in the Kongu region being nothing but the comeback of the social life in Mullai, one of the five Sangam period landscapes, Poongundran explained:

“ The ancient Tamils of Mullai ( Forests) engaged in the occupation of cattle rearing and worshiped the deity Mayon, who is now identified with Lord Krishna, believed to be an avatar of Vishnu or Perumal”

Deciphering another inscription on the wall of Thayar Sannithi ( The abode of Lakshmi, the Mother Goddess of all creatures protected by Lord Perumal) at the temple, Sundaram noted:

“ According to an inscription the Thayar Sannithi could have been built by one 'Veeramuthu Mudhali' . The epigraph also states that it was consecrated in 1848 ”

“Vaishnavism takes its roots from the social life of the ancient Mullai land Tamils. And the movement's popularity is wide in the Kongu region, which is known for its cattle wealth” added Poongundran.

Link to my article in The New Indian Express : http://epaper.newindianexpress.com/c/5549598

Posted by B.Meenakshi Sundaram at 03:04