The Kongu Woman who Triggered the Protest against Alcohol 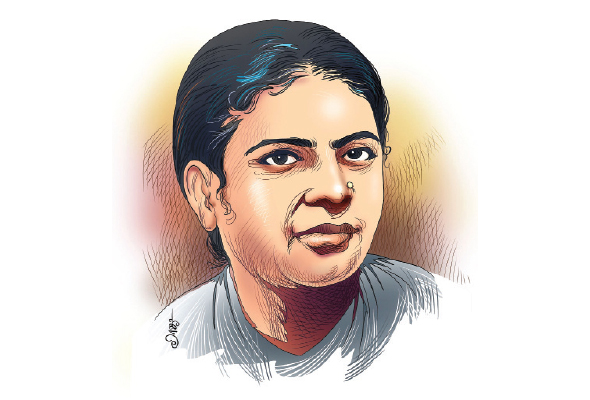 Though a treat in wine has become undesirably inevitable even in family functions these days, it is shocking that the 'alcoholic culture' has seen its development even in a school girl's alleged consumption of liquor, which caused her to make flutter in the city some days ago. Adding fuel to the fire, when the news hit the headlines, comments poured into social networks like Facebook and WhatsApp. Interestingly, a commentator remarked that progressive thinkers and feminists should only be happy about the incident misinterpreting women's liberty as nothing but their liberty in consuming liquor on par with men!

Despite the history of consuming liquor dating back to several centuries and proofs on women drinking toddy found in ancient pieces of Tamil literature, consuming liquor in the present day brings harm to both men and women. And no progressive thinker or a feminist can demand equal rights for women in consuming liquor rather than seeking a total ban on it.
While the TASMAC outlets sell Indian Made Foreign Liquor today, the 56th song in Purnanuru, a Sangam period literature informs that the ladies in the palace of the Pandya king served him the 'fragrant cool wine brought in fine ships by the Greeks'. Though the song stands witness to the trade ties between ancient Tamils and Greeks, it throws light on the opulent lives of the Sangam age kings.

It is an old story that the Kongu chieftain Adhiyaman presenting poetess Avvayar a rare species of 'Nellikani' (emblica officinalis) - the fruit believed to provide ailment free longer life. However, a Tamil teacher will be stranded at the very first line of the 235th poem in Purananuru, since Avvayar states in it that Adhiyaman had also offered her toddy to drink!

What's more, noted Tamil writer Perumal Murugan, in one of the chapters from his controversial novel Madhorubhagan, portrays the fiction's hero Kali sharing toddy with her mother, as they discuss a family affair during a calm night.

Though many farmers associations have been demanding to lift the ban on toddy, claiming it as a non-toxicant drink, the total ban on abolishing alcohol, irrespective of it being toddy or IMFL, seems gaining moment with the demise of Gandhian activist Sasi Perumal on Friday. It may be noted that he died during his protest to shift a TASMAC outlet located in the proximity of educational institutions and places of worship at Marthandam in Kanyakumari district.

Several decades ago, in Gandhiji's non-cooperative movement, even women from the Kongu region played a key role in abolishing alcohol by picketing plenty of toddy shops. As the agitation gained momentum, even other Congress leaders Madhan Mohan Malavia and C.Sankaran Nair suggested Gandhiji to give up the protest.

However, Gandhiji is said to have told them thus:

“It is not in my hands. I have to discuss this with two women crusaders against alcohol in Erode”
The one is Nagammal, wife of Periyar E.V. Ramasamy and the other Kannammal, his younger sister!

Link to my article in The New Indian Express : http://epaper.newindianexpress.com/555928/The-New-Indian-Express-Coimbatore/02082015#page/3/1
Posted by B.Meenakshi Sundaram at 22:54