The Muslim, Who Built a Mariamman Temple 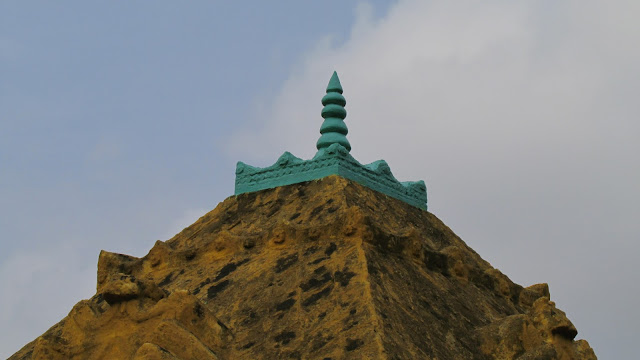 At a time, when the city has witnessed a communal unrest following the alleged murder of a Hindu Munnani activist, it is time we looked back the religious harmony between Hindus and Muslims over two centuries ago. Standing testimony to the cordial relationship between the two communities in the yesteryear Coimbatore, there stands a small Hindu temple, which was built by a Muslim in a hamlet near Avinashi in the present day Tirupur district.

Members of the Veerarajendran Archeological and Historical Research Centre, a Tirupur-based organisation, came across the temple in a village near Avinashi. The shrine, an abode of the Hindu Goddess Mariamman, stands with a dome on the Gopuram resembling a mosque!

Ravikumar, director of the organisation, says:

“Hyder Ali, the ruler of Mysore kingdom, brought the Kongu region under his control and established a number of colonies for the stay of his army soldiers. And one such colony was 'Ravuthampalayam' near Avinashi, a junction connecting the villages of south and north Kongu regions. It may be noted that Avinashi is located on the road connecting the South Kongu region and Sathyamangalam, through which one can reach Srirangapattinam, the capital of the then Mysore kingdom”

Ravi informs that Hyder also appointed a number of officers to look after the administration of different provinces and villages.

“ As the residents in Ravuthampalayam say that one such officer and commander of the cavalry was 'Ravuthar'. The Muslim officer secured a place in the hearts of the people by implementing several welfare schemes to them as reduction in tax, security to merchants from highwaymen and so on “ explains Ravi.

But, Ravuthar soon became helpless when his child got afflicted with measles.

Though the disease small pox or chicken pox is rare today, people of the yesteryear Coimbatore referred them to a Goddess and believed it was nothing but the 'arrival' of the deity Mariamman. On coming across a person with the disease, they would say ' Mariyaatha Vanthirukku' ( Goddess Mariamman has come). Nevertheless, the people had their indigenous ‘divine’ methods of treating the patient by making him or her lie on a white cotton dhoti, applying paste of neem leaves on the blisters, feeding with tender coconuts and rock candy made of palmyra sap. Moreover, a string of peeled small onions tied around the patient’s neck, would be the first identity to recognize the 'arrival' of Maariyaatha in him or her!

“ And Ravuthar too worshiped the Hindu deity Mariamman and treated his child the 'divine' way. As the little one soon recovered from the disease, the Muslim officer thanked the deity and constructed a temple for Her” says Ravi.

He also points out that the people, moved by the Muslim officer's cordial act, named their village after him as ' Ravuthampalayam'

“Even today, the people follow the tradition of naming their children as 'Ravuthan' ” informs Ravi.

Posted by B.Meenakshi Sundaram at 07:27