Serving the Abodes of God for 36 Years

Buying a match box is a matter of spending Re.1 today. Moreover, with the invention of lighters to lit cigarettes and gas stoves, match boxes will soon be things of little use. However, in the bygone era, when purchasing a match box was a 'costly affair', people had no other option,but 'borrow' fire from each other to light their traditional ovens.

“ As a boy, I used to get fire for my cooking mother with a cow dung cake from a neighbouring house “ recalls Azha. Muthupalaniappan, former assistant commissioner, Hindu Religious and Charitable Endowments department.

The 65 year ,who has recently penned his book Koyilkalil 36 Aandukal ( My 36 year experience in temples ), says:

“ You know, whenever a Devadasi ( temple dancer) of the Sri Ranganathar Swamy Temple at Srirangam passed away, the fire to cremate her body would be taken from the shrine's madaipalli ( cook-house of a temple). Also the vaaikarisi ( Handful of rice dropped into the dead person's mouth before cremation) and the kodi ( offering of a new cloth to the deceased) were also provided by the temple “

Sharing a tale behind this tradition, Muthupalaniappan informs:

“ A Devadasi beguiled a man, who had a plan to harm the temple, and she took him to the shrine's gopura and pushed him from the top. It is said that she too jumped from the temple tower and died. From then onwards, as long as the Devadasi system was in vogue in the state, the demise of any temple dancer was honoured with the tradition of the shrine's offering fire for her cremation”

Muthupalaniappan, who is already an author of the books Muthumanithiral and Padithathil Pidithathu, is working as a lawyer in Coimbatore after his retirement. A man with a passion for temple art, sculptures, theology and epigraphy, in his new book Koyilkalil 36 Aandukal, the former assistant commissioner with the H.R.& C.E department has shared his experiences on temple administration. 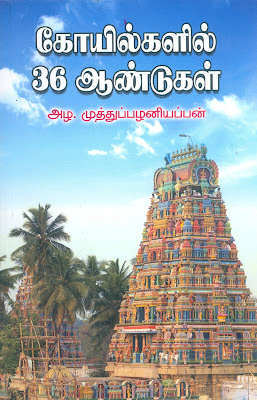 “ In the bygone era, temples were administered by teams of elderly people in villages. With the shrines being centres of public gathering, they helped people by providing them education, medical care and even lending money at needs. In short, a temple, in those days, played the role of a school, bank and hospital. Since the shrines had to function permanently with regular poojas and annual festivals, kings and landlords made gifts to them by donating a plenty of agricultural lands, whose revenue facilitated their active functioning. Nevertheless, after the country came under the British rule, The Hindu Religious and Charitable Endowments Board was established in order to check the prevalent fraud and malfeasance in Hindu temples. Later, when India became independent, The Hindu Religious and Charitable Endowments Board was modified into Hindu Religious and Charitable Endowments Department” details Muthupalaniappan.

For an ardent reader on temples, Muthupalaniappan's book Koyilkalil 36 Aandukal is an interesting work, for it narrates the historical and mythological incidents behind the temples and informs his service to their development.

Link to a small news item in The New Indian Express: http://epaper.newindianexpress.com/c/15685905
Posted by B.Meenakshi Sundaram at 23:09