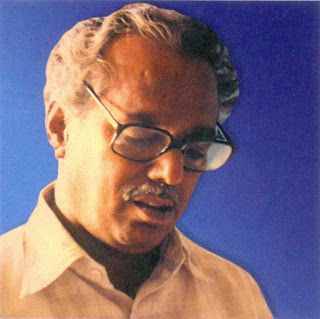 You presented me your love
Which is as great
As the sweat of a labourer.
And I gift you
This book of blank verse
Just check it
Whether it is real
As the tears of a poor man

Eminent modern Tamil poet, the late Meera alias ‘Mee. Rasendiran’ is ever remembered for his book of poems  Kanavugal+ Karpanaigal = Kaakithangal  ( Fancies + Fantasies = Scraps) for their beautiful romantic poems in blank verse blended with themes of social reformation. With the modern poet’s death anniversary falling on September 1, Coimbatore Express takes a trip through his life and works.

“ Meera, who hailed from Sivaganga, contributed his poems to our magazine Vanambadi ,as we circulated it at Coimbatore in the early 1970s. He penned poetry with a social cause even before I did so. One could feel this by reading Meera’s early day poems. However, he left poetry and became a publisher at his point of reaching the zenith in modern poetry. A man, who lived for his fellow poets, quit writing and started the publications Akaram Pathipagam and Annam Pathipagam only to bring out the works of his poetry peers”

“ Meera’s Kanavugal+ Karpanaigal = Kaakithangal, was a book of love poems, which inspired thousands of budding writers of his time. However, a poet with a social cause, he blended even the love poems with themes of social reformation.”

Sirpi informs that purist Tamil scholar N. Vanamamalai opposed the arrival of  Pudhukavithai ( New poetry), which ignored classical Tamil prosody. At the same time, the veteran opined that he would accept the new genre of poetry, if it was written with a social cause like the poems in Meera’s Kanavugal+ Karpanaigal = Kaakithangal!

Chidambaranathan, another Vanambadi poet of Coimbatore and editor of the monthly magazine Om Sakthi recalls:

“ Meera was a writer with progressive ideology. It is no exaggeration that the poems in his book Kanavugal+ Karpanaigal = Kaakithangal greatly inspired the youth of his days. Having retired as a Tamil professor from Raja Doraisingam Government Arts College, Sivaganga, he came to Coimbatore, stayed here and worked as a co-editor of Om Sakthi for about a year. However, due to health issues, he had to leave the job and return to his native Sivaganga. Within a few years, I was shocked to hear the great poet’s demise”

“ Besides being a modern poet, Meera was a food lover. Though he lived in his native town Sivaganga, it was he, who introduced me the famous non vegetarian restaurants in Coimbatore ! ”