A Walk Down the Memory Lane of Old Coimbatore 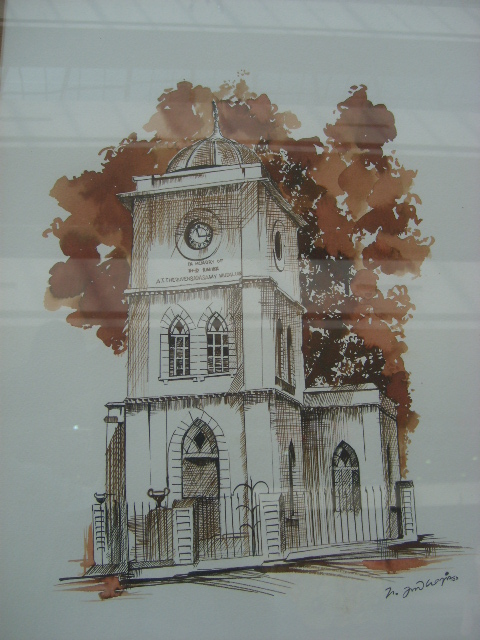 The Thottikattu Veedu (A house in the style of traditional architecture) of ‘Sivakavimani’ C.K. Subramania Mudaliar, an eminent Tamil scholar, freedom fighter and former Vice chairman of Coimbatore municipality, still speaks the glory of its past at Vaishyal street. On both sides of the heritage building at the traffic congested road, grown high - the two trees planted by Mahatma Gandhi, when he visited Coimbatore.

“C.K. Subramania Mudaliar would receive letters from eminent freedom fighters including Sri Aurobindo. However, on a day when the police were about to raid his house, CKS’s wife Meenakshi tore all the documents, burned them, stirred the ash in water and poured it into the well at the backyard of the house” recalls a descendant of C.K. Subramania Mudaliar.

“An eminent Tamil scholar, Subramania Mudaliar penned commentaries on  Periyapuranam, a saiva piece of   bhakthi literature by Sekkizhar.   Since CKS was of great help to freedom fighter, ‘Kappalotiya Thamizhan’               V.O. Chidamparam Pillai, the latter christened his son as ‘Subramaniam’ in memory of his Coimbatore friend”  informed Rajesh Govindarajulu, who led a team of history enthusiasts in the ‘Heritage Walk’ organized by The Vanavarayar Foundation as part of the Coimbatore Vizha.

“Rao Bahadur A.T. Thiruvenkatasamy Mudaliar, who was the Municipal chairman of Coimbatore, could have built  the largest house in Coimbatore in 1888, The Manikoondu ( Clock tower), which  stands tall in the centre of the city, was built by Mudaliar’s sons in memory of their father in 1923”
Rajesh  informed the two other old names of Coimbatore:

“While the area quartering the agraharam (Brahmin colony) had been called Uma Parameshwari Sathurvedhi Mangalam, the rest in the city had the name ‘Veerakerala Nallur’ ”
Tracing the etymology of the two Uppilpalayams in the city, Rajesh informs:
“The two localities were named as ‘Uppilipalayam’ after the community Uppiliyars, who were experts in constructing, maintaining and repairing forts. They also engaged in making cannon balls.”
Now, Rajesh halts for a while near the Victoria Town Hall, which is presently the administrative building of Coimbatore Corporation.

“ Commemorating  Queen Victoria’s  reign of 50 years, Sriman S.P. Narasimhalu Naidu, a Brahmasamaji, popular journalist and travel writer, who  mooted the idea of bringing Siruvani water to Coimbatore, got the Victoria Town Hall built at a cost of Rs.10,000 in 1892 “  he said.
Recalling his memory of catching a glimpse at the matinee idol and former Tamil Nadu Chief Minister M.G.R alias M.G. Ramachandran, Rajesh reminisced:

“The Nawab Hakkim Road houses two popular cinemas – Raja and Nazz. When the MGR starrer Nadodimannan ran to packed houses in Raja, the matinee idol, on the celebration of the film’s victory, came on foot in a procession, waving at the multitude of his fans”
Coimbatore is not a coastal town:

“But the city has a street by name Siviar Veedhi where only fishermen lived! They eked out a living by making nets and fishing in the tanks including Periyakulam and Valankulam”
Echoing Rajesh’s view, R. Jegadisan, an epigraphist who organized the Heritage walk, says:

“The Kannada term ‘Siviar’ denotes fishermen. The Nawab Hakkim Road, from where the street branches, had once been called ‘Meenkadai Theru’ for the line- up of a number of stalls selling fish” Link to my article in The New Indian Express : http://epaper.newindianexpress.com/c/25464186
Posted by B.Meenakshi Sundaram at 03:07