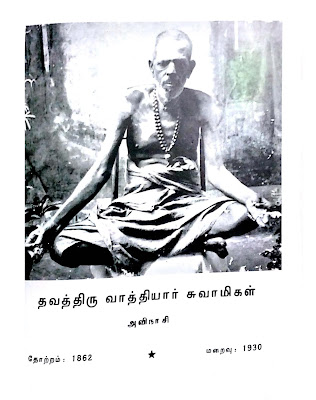 In the vernacular of yesteryear Coimbatore, when a man deserts his wife and children, he is said to have gone as a Samiyar, though he would not literally become an ascetic. People used the term  to indicate a man, who either remained a bachelor or renounced his married life. But, in a village near Tirupur, some 150 years ago, a man gave up his domestic life, literally became an ascetic and spent the rest of his life at the Avinashi Lingeshwarar Temple, which is one of the seven celebrated shrines of Kongunadu. The hermit was a Tamil scholar, whose writings in palm leaf are still treasured by his descendants.

“ ‘Vadhiyar Swamigal’, as he was called,  taught the children of his village at his house pyol, though his major occupation was weaving” informs Pulavar Sundara Ganesan, a history enthusiast and headmaster of Panchayat Union Elementary School, Chellammal Colony, Tirupur.

A diploma holder in epigraphy, Sundara Ganesan stumbled upon the palm leaf manuscripts of Vadhiyar Swamigal and he has taken up the work of deciphering them in order to bring into books. However, ‘Siva Thothira Thirattu’ a piece of bhakthi literature penned by Vadhiyar Swamigal got published in 1969 by his disciple A. Ramasamy Naidu of Coimbatore.

Ganesan says that Arivananda Swamigal would not accept anyone as his disciple, unless the latter was capable of reciting a song, which he would be allowed to listen to only once. With Vadhiyar Swamigal clearing this test, the ascetic accepted him as his disciple.

“Arivananda Swamigal, thereafter, assigned him the job of Deepa Kaingaryam ( Regularly burning lamp in the temple). However, Vadhiyar Swamigal, who is said to be good at astrology and indigenous medicine, had written many works on palm leaf. His descendants have been treasuring the manuscripts” informs Sundara Ganesan, who learned the art of deciphering stone inscriptions and palm leaf manuscripts from the late ‘Avinashi’ Ma. Ganesan, a popular epigraphist of Coimbatore.

Ganesan says that he was interested to know whether the palm leaf manuscripts of Vadhiyar Swamigal could contain references on the Tirupur of the bygone era.

Citing from Alagumalai Kuravanji, a bhakthi piece of literature on the hill shrine ‘Alagumalai’, Ganesan says that the work mentions ‘ Tirupur’ as ‘ Thirupayyur’.

“I have been tracing the etymology of ‘Thirupayur’ and I am yet to know what the place name means”  “says Ganesan. 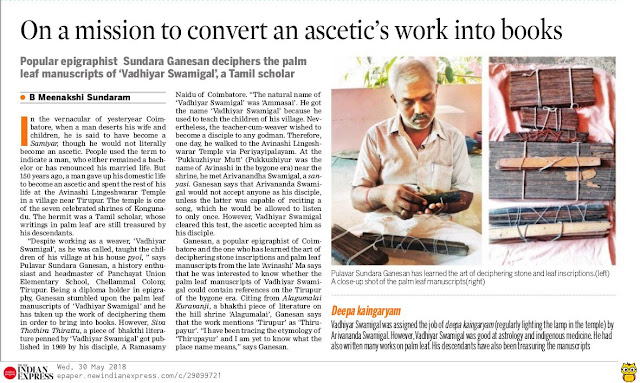 Link to the article in The New Indian Express: http://epaper.newindianexpress.com/c/29099721
Posted by B.Meenakshi Sundaram at 04:37