Yama, Give Us Longer Life 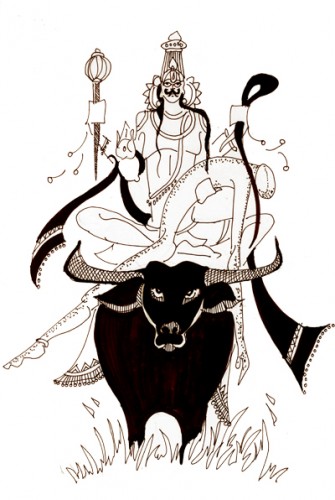 True to the meaning of the Kongu proverb, Saatchi Karan Kalil Vizhuvatharkku Sandaikaran Kalil Vizhunthidalam (It is better to apologize to the enemy than begging to the witness), a certain section of the people in Coimbatore worship a particular God to provide them longer life. However, the irony is that the deity, they worship is not Shiva or Vishnu, but Yama, the God of death!

Perhaps, they knew that Lord Shiva, who protected the young Shaivite devotee Markandeya from Yama and provided him the gift of immortality with everlasting youth hood in puranas, would not do the same for them. Hence, instead of worshipping Lord Shiva, it seems, they directly pray to Lord Yama, the deity of death, asking Him not to take away their souls soon!

However, the story of worshipping Yama began in Coimbatore after the construction of a shrine to Him as ‘Yama Dharmaraja Temple’ at Vellalore by a member of the Agamudayar or Thevar community almost three centuries ago.

Known for their brave nature in battle fields, the Agamudayars were appointed as commanders and soldiers in the armies of King Sethupathi and Thirumalai Naicker in the southern districts. However, they arrived at Coimbatore as soldiers in Thirumalai Naicker’s army and settled at places like Sulur, Irugur, Vellalore, Ramanathapuram, Kurichi, Perur and Boluvampatti when the Kongu region came under the rule of Madurai Thirumalai Naicker.

But, the ‘settlement’ of Yama, the deity of death, in Coimbatore, was just after an Agamudayar gentleman’s dream. It is said that almost three centuries ago, Nanjappa Thevar, a resident of Ramanathapuram in Coimbatore, had a vision of Lord Yama in his dream, in which the God ordered him to construct an exclusive temple for him at a spot on the banks of river Noyyal. Later, when Thevar located the spot at Vellalore, he learnt that it came within the agricultural fields of a Brahmin priest. However, after Thevar narrated the vision to the Brahmin priest, he was only glad to allot him the piece of land, on which the Yama Dharmaraja Temple has been built.

Unlike in the shrines of different deities, the poojas at the Yama Dharmaraja Temple are performed not during the auspicious timings, but at 12.30 pm every Sunday, which is the Yama Kanda, an inauspicious timing marked in the almanac.

Facing south, his favorite direction and holding his loop of rope (Pasa Kayiru), Yama is seen seated on his Buffaloe inside the sanctum sanctorum of the shrine. When the Pooja begins, musical instruments like Sangu (conch shell) and Sekandi (A kind of gong) are performed, as if it were in a funeral!


Posted by B.Meenakshi Sundaram at 05:17