Reading Tiruvacagam Everyday for a Year 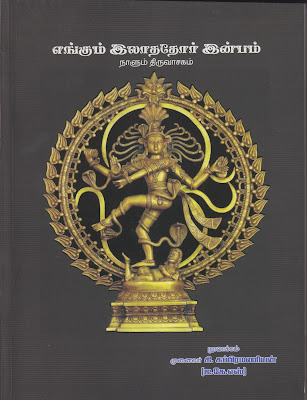 The poems in Tiruvacagam are recited daily
In all the great Caiva Temples of South India,
They are on everyone’s lips, and as dear
To the hearts of vast multitudes of excellent people there,
As the Psalms of David are to Jews and Christians

-Rev G.U. Pope, in his preface to his English translation of Tiruvacagam on April 24 1900.

Though several Tamil scholars have written detailed commentaries on the great Tamil Bhakthi literature Tiruvacagam, which was penned by poet Manickavasagar in 8th century AD, the commentaries written by Prof. I. K. Subramanian of Coimbatore for the selected 366 hymns are not only innovative, but meant for reading and enjoying each hymn for a day throughout the year. His book Engumilaathathor Inbam – Naalum Tiruvacagam (The ecstasy, which is unavailable anywhere – Tiruvacagam for everyday) was released in the city on Saturday.

“I selected a total of 366 hymns from the 656 songs in Tiruvasagam and planned to write commentary for one song everyday to complete the work in a year. As I planned, I have brought it as a book now” said I. K. Subramanian, who is an author of numerous other books and an Assistant Editor of the eleven-volume universal Tamil encyclopedia.

IKS also noted that he has written the commentaries in a simple language to take the essence of the divine literature to the masses.

The 73 year old retired Tamil professor from Government Arts College, Coimbatore, and a homeopathy practitioner underlined that without understanding Science, it is hardly possible to comprehend and enjoy Tamil Bhakthi literature.

“I shed tears while translating a song in Tiruvacagam, in which Manickavasagar breaks down and weeps realizing the labour pain of his mother while delivering him as a child”  I.K.S shared his experiences of writing commentaries on the divine work.

In his special address, ‘Thirumuraimani Pulavar’ Velayuthan said that human beings in the modern age are getting isolated from spirituality due to the serious impact of science and technology.

Pointing out that compassion for human beings, love for nature and devotion to God are the messages in Tiruvacagam, he noted:

“Manickavasagar called the people, who show little compassion for their fellow human beings, as lifeless stones. As called by the savant, most people are caught up in the rat race of modern age and hardly find time to love one another” rued Velayutham.

“Tagore, in one of his poems longed that God would better have created him as a stony mountain instead of a human being, so that he could have reclined permanently at the Lord’s feet, extending his arms wide towards the heaven”

Link to my article in The New Indian Express: http://epaper.newindianexpress.com/c/1584106

Posted by B.Meenakshi Sundaram at 09:52