A Freedom Fighter, Named after his Megaphone 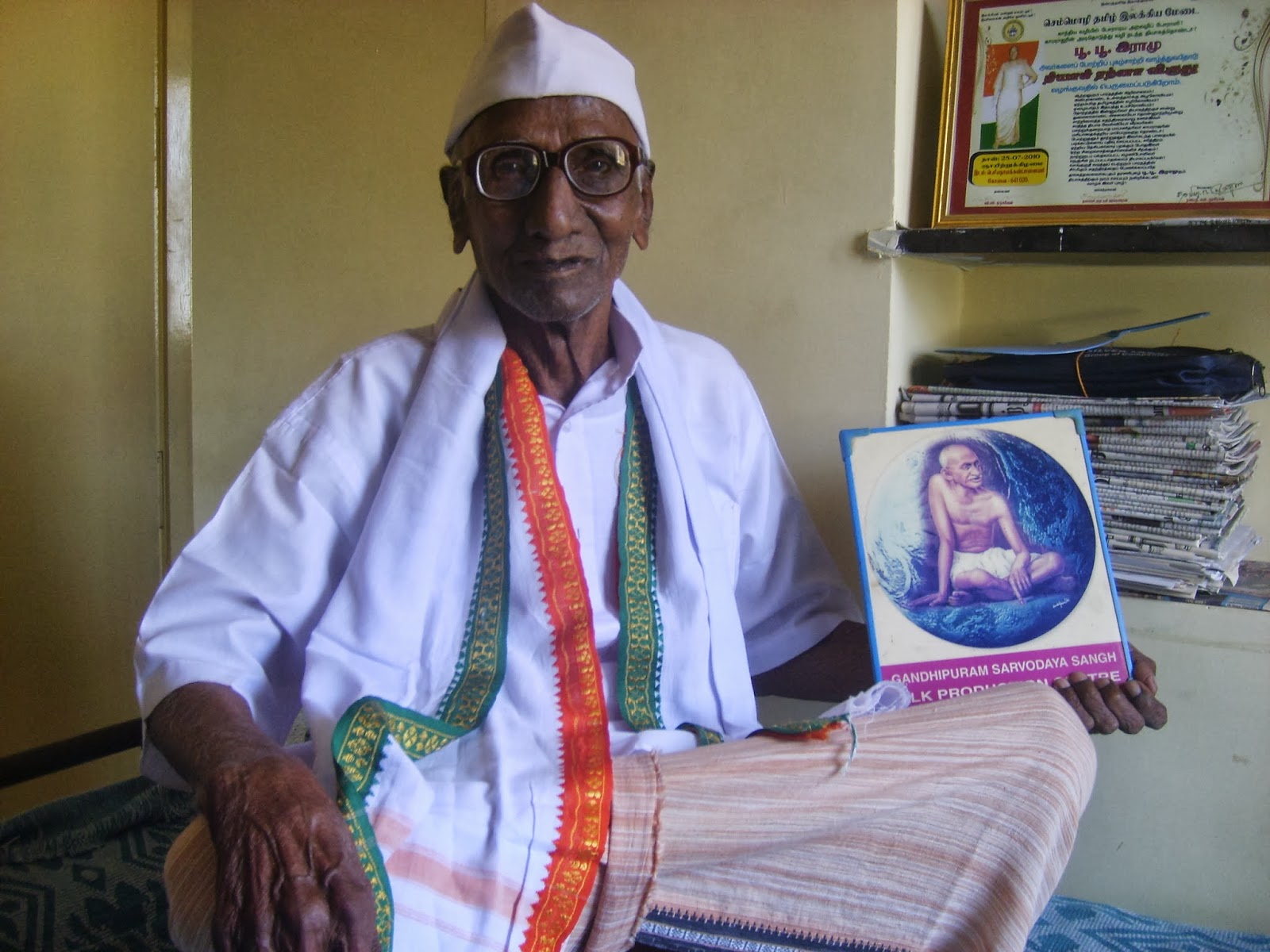 The 97 year old veteran freedom fighter Ramasamy alias ‘Bu. Bu.’ Ramu of Ondipudur is well- known to everyone in the area, as he is seen everyday strolling from his house to the Kamaraj statue on the Trichy main road to have a glance at his departed leader.

“I saw the three leaders Gandhi, Nehru and Kamaraj together at Ondipudur when I was a 13 year old boy. I listened to Gandhi speak for about 20 minutes. T. S. Avinashilingam Chettiar, the then president of the District Congress Committee interpreted Gandhi’s speech in Tamil” recalls Bu. Bu. Ramu.

Bu. Bu Ramu joined the Congress movement soon after he saw the leaders and first worked as Gram sevak, doing sanitary works and selling Khadar in the villages surrounding Palladam. Later, he became a member of a labour union founded by famous freedom fighter and trade unionist N. G. Ramasamy.

“The Sessions Court Judge, who was a man from Andhra Pradesh, first referred me as ‘Bu. Bu.’ Ramu, since my job was to announce trade union meetings through a megaphone cycling from street to street in the villages” he recalls.

As Mahatma Gandhi launched the Quit India Movement with the slogan ‘Do or Die’ in 1942, there were numerous protests throughout the nation to drive away the British. The trade unionists including Bu. Bu Ramu assembled at Kokkali Thottam in Ondipudur for a meeting to chalk out strategies to derail a train carrying explosives at Singanallur Tank. The meeting, which was conducted in the dead of the night on August 11, 1942, was presided over by N. G. Ramasamy.

“As discussed in the meeting, on the midnight of August 12, 1942, we successfully derailed the goods train, which was carrying explosives to Madras from the cordite factory in Aruvankadu” informs Bu. Bu. Ramu.

Asked about his participation in torching the Sulur Aerodrome, which was another landmark protest in the freedom struggle of Coimbatore, Bu. Bu. Ramu recollects:

“As we wanted everyone to get out of the Sulur Aerodrome before setting it ablaze, we pelted stones using a Kavan (a sling). However, as many as three British soldiers guarding the aerodrome died in the fire”

Bu. Bu. Ramu was awarded a total of 47 years imprisonment on various charges. However, after spending 3 and half years in Alipore jail, he was released after the interim government formed under C. R Rajagopalachari as Chief Minister of Madras Presidency.

“When I was arrested, the cops at Singanallur police station immersed my hands in water and pierced needle between my nails and flesh forcing me to disclose the names of my comrades. They made me lay nude on the floor and thrashed me from head to toe with their lathis. When I asked for water, they forced me to drink my urine” he signs off.

Link to my article in The New Indian Express: http://epaper.newindianexpress.com/c/1716344
Posted by B.Meenakshi Sundaram at 19:52