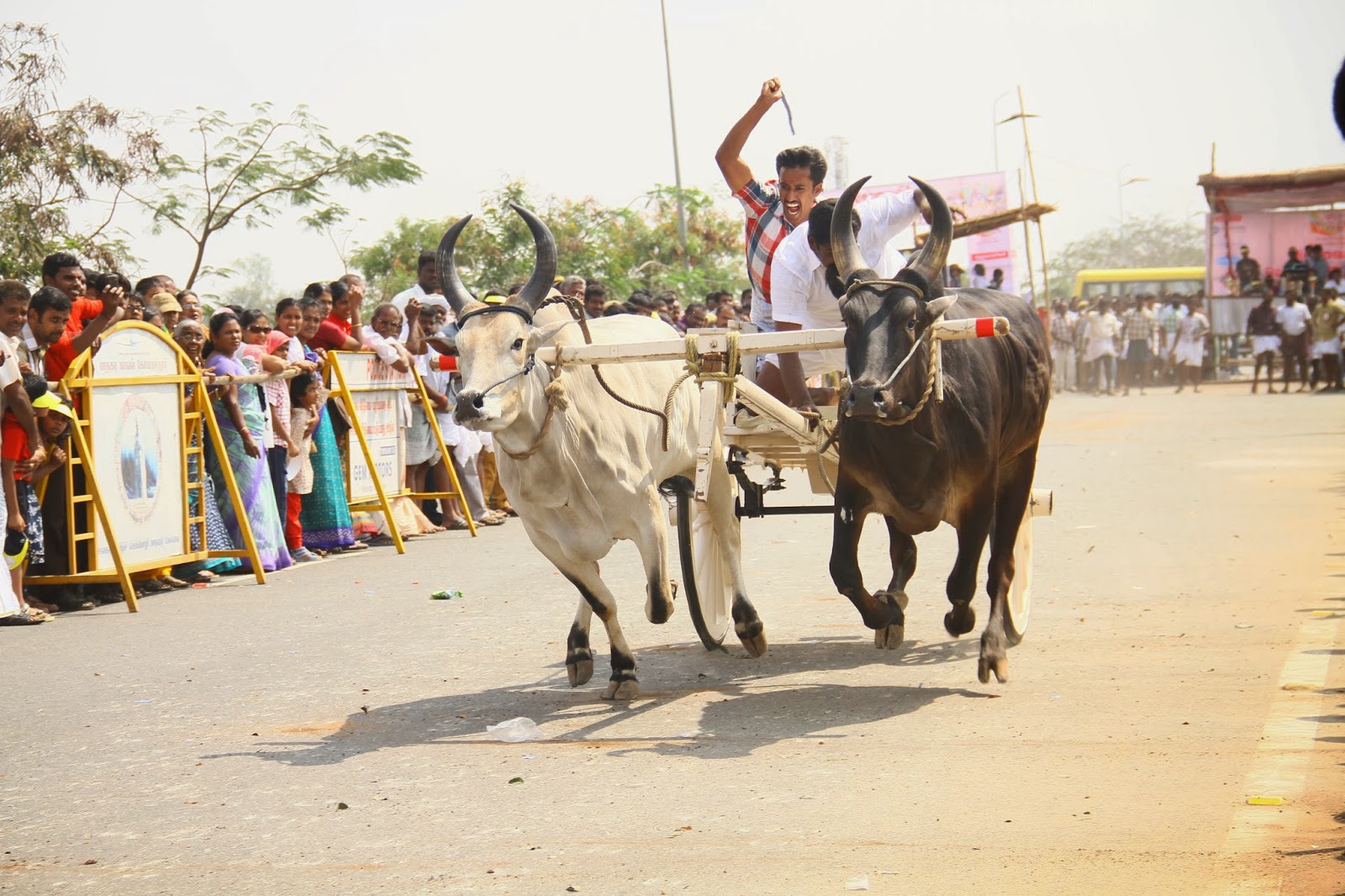 For thousands of Coimbatoreans, Sunday was a day of great entertainment, as they thronged both sides of the Codissia Road to watch the Rekla race (Bullock cart race), which was organized as the part of the Coimbatore Vizha 2014

The traditional sport of Tamils, which is held in different villages of the Kongu region at least once in 15 days, was organized by The Vanavarayar Foundation in the city after about three decades.

“The objective behind conducting the Rekla race is to preserve the rural culture of the Kongu society. With many participants in the race being graduates in engineering and information technology, I am sure the traditional sport is not disappeared” averred Shankar Vanavarayar, President of The Vanavarayar Foundation.

He also informed that the participants spend around Rs 20,000 per month to feed their bulls with nutritious food and get them ready for the race.

“ Known to me, one of the participants in the Rekla race was not willing to sell his strong bull, when a buyer was ready to purchase it from him even at a price of Rs 7 lakh” added Shankar.

With around 3000 spectators watching the race, the pace of the bullock carts on the Codissia Road left them awe-struck. Applause rented the air, when the swift cart of Senthil Kumar of Velayuthampalayam in Pollachi came first in the 200 metre category, completing the distance in 15.66 seconds. Similarly, Appadurai of Dharapuram received a rousing approval by coming first in the 300 metre category by completing the distance in 23.42 seconds.

Following Senthil Kumar, Suresh of Kinathukadavu and Gnanavel of Manupatti in Tirupur district bagged the second and third prizes respectively in the 200 metre category. Similarly, with Santhakumar of Kinathukadavu bagging the second prize in the 300 metre category, Shankar Vanavarayar, the president of the Vanavarayar Foundation, who too was a participant in the race, came in the third place.

Vellingiri, the Coordinator of Vanavarayar Foundation, who organized the event said:

“Before conducting the event in the city, we organized the semi-finals of the Rekla race at Samathur in Pollachi, from which we selected 40 participants from around 250 bullock carts”

Sukumar, a 33 year old software professional, who came to Coimbatore to watch the Rekla race, said:

“It was the first time in my life I have seen the Rekla race. Having seen the large crowd of spectators at the event today, I feel the concern of the Kongu people in preserving their traditional sport to posterity”

Noted archeologist and epigraphist Jegadhisan said that the tradition of using bullock carts in the Tamil society dates back to centuries before the Christian era, as from the mentions found in Tamil Sangam literature, which say that the salt merchants, who were called ‘Umanars’ carried salt in bullock carts.

“The conducting of  Rekla Race in Coimbatore shows the Kongu people’s love for  cattle, which they considered as their wealth when read from their social history” added Jegadhisan.

Link to my article in The New Indian Express:http://epaper.newindianexpress.com/c/2320391

Posted by B.Meenakshi Sundaram at 20:11