The Jumbos' Home is the Jungle 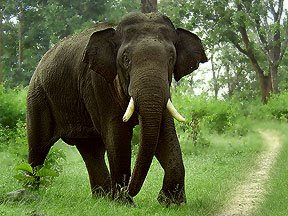 Unlike human beings of a country, elephants look little different from one another in the eyes of common people. Despite the surprise of coming across temple elephants bearing names of human beings like Janaki and Kalyani, the general public refer to them just as Koyil Yaanaikal. With many of us are caught in the illusion that the home of such poor pachyderms is a temple, or sometimes a rejuvenation camp, we have forgotten that the jumbos' home is the jungle. At a time, when the modern man complains of wild elephants wreaking havoc on 'human habitations', it is an irony that only such 'human habitations' are causing havoc to the jumbos by blocking their natural corridors !

Nevertheless, the history of man's interference with wild elephants by hunting and taming them dates back to several hundred years.

With the forests of the Chera kingdom comprising the Kongu region being rich in elephant population, poet Arisil Kizhar, in his 77th song of Pathitru Paththu, a Sangam period work, compares the Chera king's elephant army to a large herd of the cattle owned by the Kongars ( Natives of the ancient Kongunadu). Describing the scene of a battle,the bard points out that the angry elephants attacked even the shadows of the predatory birds flying high.

On the other hand, the Chola kings, whose country had few forests, desired to possess such elephant armies. And one such king had ordered a chieftain by name Ezhini to capture a great number of jumbos from the woods of the Chera country and bring them to him. But, with Ezhini disobeying his orders, the king got his teeth extracted and embedded them on his strong fort door as sign of victory!.

Megasthenes,a Greek historian and diplomat, in his book Indica, has documented how the hunters in India caught the wild male elephants by luring them using their tamed female ones. They first housed the female elephants in the Kedah ( A large pit used to trap wild elephants) in order to attract the wild male jumbos that roamed in the woods at night. And once a wild elephant fell into the Kedah, the hunters made a tamed elephant pull the wild one out and fight with it until the latter got exhausted. Then they chained the wild one's legs and fastened its neck with a strong belt containing holes, into which the hunters drove sharp nails. Hence, the animal, unable to bear the pain, would not move its head to throw away the mahout seated on its back. Further, keeping the animal hungry for a certain period, they tamed it gradually by feeding it in green leaves and grass.

And it is agonizing to see such a strong, brave animal, having become a temple elephant, is seen 'playing' mouth organ to fascinate the viewers at the annual rejuvenation camp in Thekkampatti near Mettupalayam !

Link to my article in The New Indian Express: http://epaper.newindianexpress.com/c/8153030

Posted by B.Meenakshi Sundaram at 04:24