The Rise and Fall of the Kongu Temple Dancers 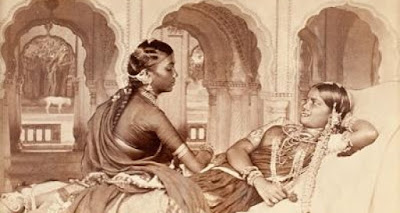 Decades ago in the Kongu region, members of the intermediate Kongu Vellalar community had great 'respect' and 'affection' for certain girls hailing from other different communities. With such a girl submitting her entire life to the service of the God, the Kongu Vellalars treated her even as the eldest of all children in their families. It was once a tradition in the Kongu Vellalar clans to select the beautiful girls and dedicate them to the temples of their family deities. And such good-looking girls, being called as 'Kulamaanikis' ( The gems of the clan), would also be good at singing and dancing, by which they 'entertained' the 'devotees' in the temples on auspicious occasions.


As the members of a particular clan in the community gathered in a temple, the girl, who was selected after her beauty and artistic talents, would be brought to the shrine in a grand procession along with her kin and conferred on the title 'Kulamaanikki'. She would also be presented new clothes, exquisite ornaments and plenty of agricultural lands on the occasion. Though the girl was not supposed to marry anyone, she would be presented the 'Mangala Naan' ( Sacred wedding necklace) symbolizing that she was getting married to the God !

The copper plates discovered in various parts of the Kongu region, which are still preserved, mention the girls as 'Kulamaanikis', though were generally called ' Thevaradiyar' ( Servants of the God).

A palm leaf manuscript, which is preserved at the Perur Mutt, informs that members of the Kongu Vellalar clan 'Andhuvan Kulam' assembled at their family deity's temple 'Aathanur Amman Koyil' and appointed a girl by name 'Nagamalai' as their 'Kulamaanikki'

In the same manner, another girl by name 'Nalla Penn' was made a Kulamaanikki of Thooran Kulam, while its members from various places came together at the shrine of their family deity Ponkaliamman Koyil in Kumaralingam.

As observed from such historical documents, the temple dancers once enjoyed high privileges given by kings and landlords.

At a time, when priests cry foul at the Supreme Court's question on the practice of barring women in Sabarimala's Ayyappan Temple, it is surprising to know the freedom enjoyed by the temple dancers in the Thirumuruganadheeswarar Temple at Thirumurugan Poondi.

A 13th century inscription found in the shrine has recorded that the Thevaradiyars were provided the right of entering even the sanctum santorum of the shrine!

Nevertheless, Francis Buchanan, who visited Coimbatore following the death of Tipu Sultan, has written in his book A Journey from Madras through Countries of Mysore, Canara and Malabar that most Brahmins in Coimbatore had the Thevaradiyars of the Perur Patteeswarar Temple as their mistresses.


Posted by B.Meenakshi Sundaram at 05:40