Kaliammal, a woman from a rural pocket of Coimbatore, was forced to leave the house within days from her husband's death. The man, a musician and harmonium maker, had eked out a living at Kinathukadavu by thatching house roofs many decades ago. And the remaining part of the widow's life was with her another destitute elder sister and an unmarried younger sister, who were taken care of their brother Arumugam, the only male member of the family.

This is a real life incident, which happened in a family at Kinathukadavu many decades ago.

But, a short story penned by Maa.Natarasan, a writer of regional fiction on the rural pockets of Coimbatore, resembles the real life incident in Kaliammal's family.

“ In any village of Coimbatore, you could see at least five or six such destitute women living in their mother's home. Such incidents stand witness to the prevalence of male domination even in the 21st century.” says Ma. Na, as he is popularly called in the literary circles of Coimbatore. 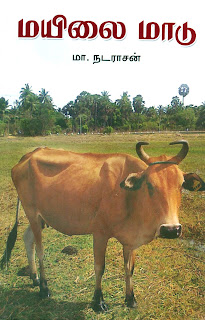 The short story on the title Pirava Puli ( The tamarind that cannot be born), which is found in his recently published book Mayilai Maadu, depicts the dedication of the character Palanisamy in taking care of his two destitute sisters Lakshmi, Sarasa and their respective children. The author has appropriately titled the short story as Pirava Puli - a strange tamarind tree seen at the famous Patteeswarar Temple in Perur. The tree got its name 'Pirava Puli', since its seeds do not produce shoots.

“ I have compared the selfless Palanisamy with the holy tamarind tree, as he has decided not to marry a woman and beget children by her. Because, he is shouldered with the responsibility for life in taking care of his two destitute sisters and their kids ” says Maa.Na.

“ In the rural Kongu society, you can come across such words and phrases more from women, since they only have time to chat for long hours ”

The author, whose writings reflect the social life of agricultural families in the Kongu region, informs:

“ Eking out a living by agriculture is hard not only these days. The bitter truth was felt even during the time of my father, who was a farmer at Mandiripalayam. Hence, he did not want me continue his line, but advised me to study well and grab a 'white collar' job.”

Nevertheless, Maa.Na, despite living in the city, finds more pleasure in visiting his native village quite often and meeting his early day friends and relatives.

“ What I lost in the alienation from my traditional roots by arriving at the city, I discovered them in R.Shanmugasundaram's novels Nagammal and Poovum Pinjum, as they reflected the rural social life of Kongu region. While I was a youth, I met the great Kongu novelist at 'Chidamparam Poonga ' ( V.O.C park). He was in conversation with Kovai Gnani, a veteran Marxist literary critic of Coimbatore” he recalls.

Link to the article in The New Indian Express: http://epaper.newindianexpress.com/c/14293522
Posted by B.Meenakshi Sundaram at 07:14