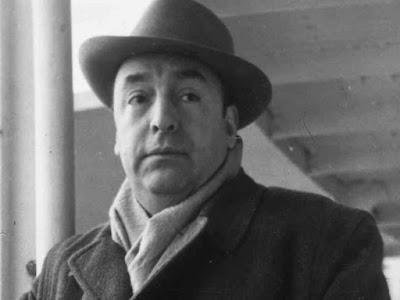 How is the translation of their languages
Arranged with the birds?

- Pablo Neruda, The Book of Questions

As a boy, Pa.Gunasekar would run errands for the DMK founder C.N.Annadurai, whenever the leader visited Coimbatore. Anna would call the 15 year-old boy and ask him to hire a horse cart,in which he and his party colleague E.V.K.Sampath traveled on the streets of Coimbatore to address public meetings.

An author of as many as 24 books, Gunasekar is 80 years old.


“ We lived just opposite the house of the couple Krishnasamy and Gandhimathi in R.S.Puram. Gandhimathi, a teacher of Mathematics, was the daughter of Kannammal, Periyar E.V.Ramasamy's younger sister. And Krishnasamy was a cousin of E.V.K.Sampath. During those days, I have seen Anna and Sampath stay in their house and go to the Rainbow cinema in an Oldsmobile car to watch English films” recalls Gunasekar.

“ After enjoying an evening show at Rainbow, the Dravidian stalwarts traveled to 'Chidamparam Poonga' ( V.O.C.Park) in a horse cart and addressed the public meetings there” reminisces Gunasekar, who also penned a book Perarignar Anna Oru Pugazh Gopuram – His memoirs on C.N.Annadurai.

The leader, whom people addressed as 'Tamil Nadu's Bernard Shaw' for his memorable plays, staged many of them including Chandiramohan, Or Iravu, Vandikaran Mahan and Needhi
Devan Mayakkam at the R.S.Puram Boys High School.

“ In Needhi Devan Mayakkkam, I have seen Anna even donning the role of Ravana, the Lankan Tamil king, who is depicted as a villain in the Ramayana “ remembers Gunasekar.

Though Gunasekar's earlier inspiration was C.N.Annadurai, his world of letters has crossed new horizons and brought valuable pieces of world literature to Tamil.

Gunasekar, who earlier rendered a number of Latin American poems into Tamil and compiled them in his book Kannadigalai Vizhungum Kannnadi ( A mirror that swallows mirrors), has now come out with another work Kaadhal Oru Minnal Por ( Love, a lightning war) – his translation of poems from 100 Love Sonnets, a book written by the Nobel laureate Pablo Neruda.

An avid reader of literature, Gunasekar says that his life is synonymous with books. 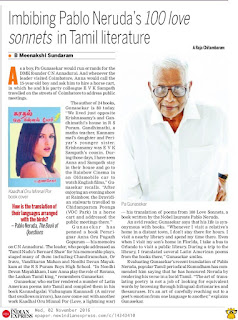 “ Whenever I had a compulsion of visiting a relative's home in a distant town, I don't stay there for long hours, but rather go to a nearby library and spend my time there. Even when I visit my son's home in Florida in the US, I take a bus to Orlando to reach a public library . During one such visit to the library, I translated many of the Latin American poems from the books available there” informs Gunasekar.

Evaluating Gunasekar's recent translation of Pablo Neruda, popular Tamil periodical Kumudham has commended him saying that he has honoured Neruda by rendering his verse in a lucid Tamil language.

“ The art of translating poetry is not a job of looking for equivalent words by browsing through bilingual dictionaries and thesauruses. But it is an art of carefully fetching a poet's emotion from one language to another “ signs off Gunasekar.

Link to the article in The New Indian Express: http://epaper.newindianexpress.com/c/14343410
Posted by B.Meenakshi Sundaram at 01:46