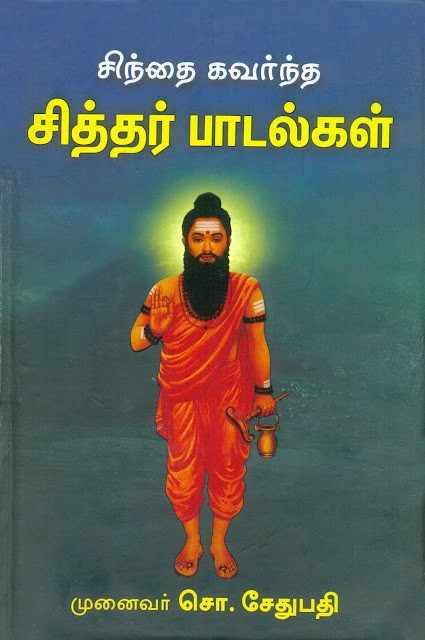 Ignorant people, who are in the rat race of modern life, can opt out of the meaningless struggle for material, if they read and enjoy a few interesting songs by Pambatti Siddhar, one of the unorthodox saints, who practised a revolutionary form of spirituality against the established religious doctrines in Tamil Nadu. Though most Coimbatoreans have been to the 'Pambatti Siddhar Cave' on Marudhamalai, many know little on his life, contributions and attainment of Samadhi in the cave.

“The term 'Siddha' has different synonyms to mean the wisest man, for 'Sidh' means wisdom” explains S. Sethupathi, who has authored the Tamil book Sindhai Kavarntha Siddhar Padalkal ( Inspiring poems of the Siddhas)

An author of over 50 Tamil books, Sethupathi is currently a professor of Tamil in Bharathidasan Government College for Women, Puducherry. His book Sinthai Kavarntha Siddhar Paadalkal is a compilation of poems by as many as 24 Siddhas. Of them, a verse by Pambatti Siddhar parodies the short- lived material pleasures of people.

Eminent poet and bilingual translator M.L Thangappa has rendered the poem into English for Parai, an anthology of Tamil literature edited by modern Tamil poet Pothiyaverpan. It reads thus:

Storeyed mansions
Decorated halls
Fortressed castles and palaces
Do not accompany one
After life is gone.
People who know this
Do not cherish those things
But look upon them with disdain.
Declare this to the world, O snake

Though the world does not know the natural name of the unorthodox saint, it is interesting to note that he got the name ' Pambatti Siddhar', as he could once be a snake charmer by profession. Some other researchers on Siddha literature view it from a different angle and opine that it could be due to the refrain in his poems ' O snake', as, at the end of every stanza, he orders the serpent to take his philosophy to people.

In addition to the poems, Sethupathi has also provided short biographical sketches of the Siddhas as he heard from people and read from legends, for no historical documentation was done on their lives.

“ Legend has it that Pambatti Siddhar was once a snake charmer. One day, he had gone deep into the woods looking for a king cobra, which had a ruby in it. But, there, he came across a mystic, whose name was Sattai Muni. The mystic, with a tinge of philosophy, asked the snake charmer why he had come in search for the serpent, while it is already within his body ! Then he explained to him that every human body is a forest, inside which a cobra dwells. Its name is Kundalini, the potential power which is believed to lie coiled ( like a snake) at the base of one's spine” says Sethupathi.

It is also believed that Kundalini is awakened through meditation and other yogic exercises for attaining enlightenment.

“ The snake charmer accepted Sattai Muni as his guru and listened to his 'upathesams'. Then having learned all austerities from him, the snake charmer did penance for years and finally became a 'Siddha'. Hence he came to be called 'Pambatti Siddhar' ” explains Sethupathi.

Link to a short, edited write-up in The New Indian Express : http://epaper.newindianexpress.com/c/14922106
Posted by B.Meenakshi Sundaram at 02:24