Throwing Light on the Dravidian Culture in Indus Valley 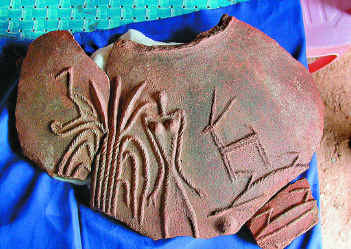 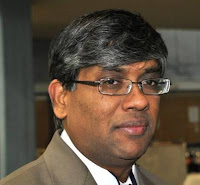 For N. Ganesan, an acclaimed archaeologist from Houston, U.S.A, who has been in the mission to prove the Dravidian cultural links with the Indus Valley civilisation, the recent DNA evidence on the streaming of Aryans into India around 2000-1500 BC, has strengthened his theories.

Ganesan, a native of Pollachi,is an engineer in the National Aeronautics and Space Administration ( NASA). He obtained his Phd from Pennsylvania State University. But, with his passion for Tamil literature and history, he carved a niche for himself  in the field of archaeology.

An associate of erudite scholars across the world including George L . Hart, Asko Parpola, Iravatham Mahadevan and Michael Witzel, the man from the agricultural town says: 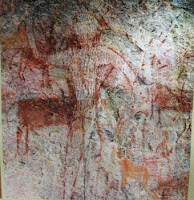 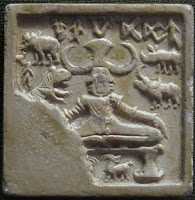 “ A genetic research, based on a barrack of a new DNA evidence has clearly stated that Aryans’entered India from 2000 B.C to 1500 B.C at the end of Indus Valley civilisation, carrying with them the texts of their pastoral literature ”

“ Prof. Martin Richards of the University of Huddersfield, U.K and his team of scientists, recently opined that the Y-DNA ( Chromosomes transmitted from father to son) in India showed a major external gene infusion from outside the country within the last 4000 to 4500 years. On the other hand, the mtDNA ( Chromosomes transmitted from mother to daughter) reflected little external gene infusion. Because, the migrants were mostly men”

Linking the recent DNA evidence with the history of research in Indus Valley, the archaeologist points out:

“ Aryan language speakers entered India after the decline of Indus Valley civilisation. Eminent people including Henry Heras, a Spanish Jesuit priest, archaeologist and historian, Iravatham Mahadevan, another noted archaeologist, and Asko Parpola, a Finnish Indologist have researched and written much pointing to the Dravidian elements found  in the religion, culture and arts of the Indus Valley”

Ganesan has presented several research papers on the cultural aspects of Indus Valley civilisation at a number of symposia in India and abroad.

Illustrating a seal discovered from Mohenjo-daro, Ganesan explains how the Dravidian link to Indus Valley civilisation was blacked out by the later Vedic religion :

“ The deity on the seal is seen surrounded by a tiger, elephant, rhinoceros and water buffalo.There, you can also see a fish and a gharial. The bull-horned male God of the Indus valley can be called ‘ Pasupathi’ or ‘Proto Siva’. But on the contrary, He is ‘Varuna’, the God of the Sangam age landscape Neithal ( Seashore), who was later incorporated as Lord Siva in the Hindu pantheon” 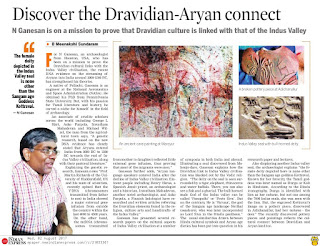 “ The female deity depicted here is none other than the Sangam age Goddess Kottravai.  Known for Her ferocity, the Tamil Goddess was later converted into Durga or Kali in Hinduism. In Hindu iconography, Durga is identified with lion as her vahana, but not one in the 7000 Indus seals, She is seen with the lion. But, the engraving of Kottravai’s  image on a pottery piece, which was discovered at the archaeological site in Adichanallur ,  She was seen with her vahana - the deer”

Ganesan opinion reminds a cave painting at Marayur, which also represents Kottravai surrounded by the deer.

Link to the article in The New Indian Express: http://epaper.newindianexpress.com/c/21033361
Posted by B.Meenakshi Sundaram at 21:22