A Tribute to the Messiah of Eezhavas 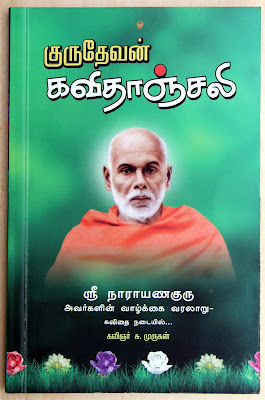 Just because they were said to be born in lower caste in the Hindu religion, the Eezhva girls in Kerala were forced to pay tax, but for their breasts in the name Mulakaram. Called as Avarnas, the untouchable Eezhva community could not have liberated itself from the cruelties of discrimination, had the noted social reformer Sri Narayana Guru fought for their rights in the nineteenth century.
“It is painful to recall an oral tradition, which discloses that an Eezhava girl, unable to pay her Mulakaram, cut her breasts and gave them as tax. Therefore, the native village of the girl got its name as ‘Mulaichiparambu’ near Thiruvananthapuram” says Murugan, a Tamil poet, who has penned a poetic biography of Sri Narayana Guru in Tamil as ‘ Gurudevan Kavithanjali’
The author, who is a retired Assistant Commissioner (Accounts) of Coimbatore Corporation, points out:

“The gruesome act of the Eezhava girl reflects her wrath against the touch-me-not Brahmins, who were behind the princely state of Travancore. By doing so, the poor girl left a question to them as what other tax they would collect if she had no breasts at all”
At a time, when the present-day religious outfits seek a law banning religious conversions in the country, Murugan informs in his book that Narayana Guru welcomed religious conversions. Reminding the fact that most people in India embraced Christianity and Islam only after facing severe caste discrimination in Hinduism, Murugan points out:

“Narayana Guru opined that it was nothing wrong for people to switch over from one faith to another if it helps them progress in life, as the great philosopher’s goal was only the development of mankind and not religion”

“The Brahmins objected Narayana Guru’s consecrating the idol of Shiva at Aruvipuram and warned him that only the priestly class was entitled to do so. Nonetheless, the Gurudev paid them back in the same coin saying that he consecrated only the ‘Eezhava Shiva’ and not the ‘Brahmin Shiva’” says the 61-year-old.

An ardent lover of Tamil, Murugan, who hails from Nagercoil, says that Eezhavas were the people from Eezham, a part of Sri Lanka and have their roots in the ancient Tamil race.

“Several centuries ago, a total of three Tamil Sangams existed in different periods in Kumarikandam, which is identified with the sea-engulfed Lemuria continent. And the great Tamil work Thirukural
was launched in the first Tamil Sangam. Interestingly, the book launch was presided over by Tamil scholar Athangottu Aasan, who was an Eezhava” says Murugan.
Note: I penned the above feature in Express as a curtain-raiser to Murugan's book in February 2015. However, I thought of re-posting it soon after I happened to watch this short film 'Mulakaram-The Breast Tax' by Yogesh Pagare.Please find the link below: