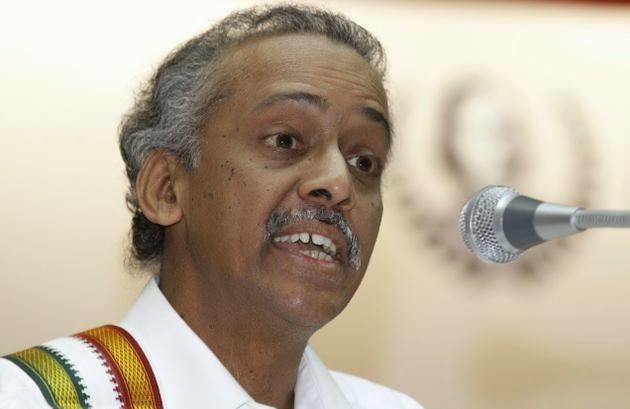 For Tamil lovers of Coimbatore, Monday is the day of days, as they had a rare opportunity to meet internationally -renowned Tamil scholars, when the inauguration of the international conference on Tamil Diaspora Literature and Education was held at Dr. N.G. P Arts and Science College in the city here today.

Organized by the Centre for Tamil Culture, the programme included the release of the book Thayagam Kadantha Tamil, an anthology containing articles from Tamil scholars abroad. The contributors include Ulrike Niklas, Head, Department of South Asian Studies, University of Cologne from Germany and Zhao Jiang, Director of the China Radio international’s Tamil station from China.

Explaining the objective behind the international conference, veteran journalist Malan pointed out:

“With Tamils living all over the world today, the demarcation of the ancient Tamil speaking region just as Vadavenkatam to Thenkumari  mentioned by Tamil scholar Panamparanar in his prologue to the ancient Tamil grammar work Tholkappiyam, has lost its meaning today”

“ Ramasubramanian’s famous column Sol Vettai ( Word hunt) in Dinamani, a sister publication of The New Indian Express, was so popular among readers of Tamil, as he roped in even readers for coining equivalent terms to the new words  in English. In fact, he proved his skills as a judge in etymology too, by accurately investigating the deep meaning of words”

Dr. Nalla. G. Palanisamy, founder-president of The Centre for Tamil Culture, said in his presidential address:

“The age- old tradition and culture of Tamil language is preserved and practiced more by the Tamil people, who have spread across foreign countries these days”

Expressing concern over the degradation of culture in the modern world, popular Tamil scholar Silampoli Chellappan rued that the cultural values of Tamils are under threat due to lewd dialogues and visuals in commercial Tamil movies and T.V. programmes these days.

Sharing the experiences of coining new Tamil words in his popular column Sol Vettai in Dinamani, V. Ramasubramanian said in his special address:

“In one of my articles, I just thought of coining the equivalent Tamil word for the expression ‘Phobia’ as ‘Achcham’ which generally means ‘Fear’ in English. But when I received a letter from a Tamil scholar by name Saiva Pulavar Tamizh Selvi from Sekkizhar Sivanadi Kazhagam, I was amazed to know from her that the Tamil Saivite  literature Saiva Sidhdhantha has a total of 47 words to mean different forms of fear arising out of four states of mind namely Manam, Siththu, Budhdhi and Akangaram!”

P.K. Ponnusamy, Former Vice-chancellor, University of Madras, ‘Iakoka’ Subramaniam writer and industrialist and Tamil scholar R. Karthikesu from Malaysia were among those present in the function.
link to my article in The New Indian Express: http://epaper.newindianexpress.com/c/2266148

Posted by B.Meenakshi Sundaram at 06:48