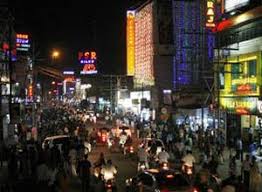 As a boy, late friend Sreepathy Padmanaba, was traveling in a city bus on Trichy Road. When the bus halted at a particular stop, to his great surprise, Sreepathy wondered how the bus conductor had known his name and asked him to get down ‘Sreepathy Erangu’. The departed poet and translator  recalled the irony in one of his books as how he mistook the conductor’s words, when the latter only asked the passengers to get down at ‘Sreepathy’ – the bus stop after the famed  yesteryear cinema. Despite the disappearance of Sreepathy and the functioning of a popular departmental store at its place, a commoner, who travels on a city bus, buys a ticket only to ‘Sreepathy’.
In explaining the reason behind place names, not all Coimbatoreans are poets, but their imagination is sometimes richer than that of poets. If not, how could a college-day friend of this writer explain the etymology of Oppanakara Street in such a beautiful fashion!
For most of us, the Coimbatoreans, it is a walk down memory lane to recall how our fathers, the sole breadwinners of the family, took us to Townhall to purchase groceries and vegetables every month after drawing their salary. We, the children, walked on the pavement beside the busy Big Bazaar Street held by the caring hands of our mothers. With our mouths wide open at the majestic buildings of Royal and Carnatic cinemas, we were led through the crowded streets and lanes of Coimbatore.
For the friend, one such street that made him curious was Oppanakara Street, and he should have mused on its meaning for years.  Later on, like a quiz master, he presented a question to his college mates.
“You know how Oppanakara Veedhi got its name?
Arousing interest, he then disclosed the answer.
“Long ago, a man, who looked at the busy shops and the tall buildings on both sides of the street, is said to have cried in surprise “Oh! Panakara Veedhi” (Oh! it is a rich street). From then on, it came to be called so and later got corrupted from Oh Panakara Veedhi to Oppanakara Veedhi!”
But his etymology was unacceptable to another history enthusiast, who had been caught in the illusion that Coimbatore was once a royal city, ruled by great kings and queens, who were clad in elaborate clothing, wore dazzling jewels and put on heavy make-up.
He explained:
“Oppanakara Street is a corruption of ‘Oppanai Kaarar Veedhi’, since it was once a colony of Oppanaikarar, whose vocation was giving make-up to Rajas and Ranis”
Lending ears to his tale, one cannot help wishing that Coimbatore could be such a royal town!
But Kovai Kizhar, one of the pioneers of writing the history of Coimbatore, cracked this puzzle on Oppanakara Street.
“The street was named after ‘Oppanagarars’, who were a clan of the Balija community. During the Vijayanagara rule, they were the authorities to disburse money (Oppuviththu Tharuthal) in the market. As they lived on this street, it came to be called as ‘ Oppanagara Veedhi’
The streets, bus stops and localities of Coimbatore were not named by anyone, but came to be called naturally after their respective geographies. The localities Avarampalayam and Poolaimedu (Peelamedu) are still called so, though there are hardly any Avaarampoo (Flower of Cassia auriculata ) and Poolaipoo (Aerva lanata)  today. Interestingly, the bus stop ‘Puliyakulam’ is not literally a ‘pond of tigers’. May God bless the man, who misspelled the word and misinterpreted tamarind as tiger!
Sometimes, the old names of bus stops too change due to the changes in their geographies. Yesteryear Coimbatoreans called a bus stop as Ginning Factory, which we now mention Women’s Polytechnic.
Nevertheless, names of certain bus stops get registered in our minds despite whatever the ‘sociopolitical’ changes in their geographies. Such changes never bother to fool us.
When a stranger asks you where Huzur Road is, you are sure to direct the person on the right way.
“Just take left at Anna Silai”